This subject is totally off limits. and this post contains a graphic photo. Now you HAVE to read it!

Listen, I know we’re not supposed to talk about this kinda stuff… but I’m going to anyway.

I am not a New Age-er. I’m not. And, I admittedly don’t know much about any of the Eastern Religions, so, again, not really my thing. Ok, I do, sometimes, ask my husband if he did something horrible in a past life and now has to spend a lifetime married to me as punishment (“Sooo, what, were you, like….Hitler? Did you eat a baby? Why would God do this to you?”). Of course I’m only kidding… sort of. But, sometimes, things happen in this world, strange things, wonderful things, things that make us scratch our head, or sigh, or smile. And these things can help us to see that there is something else, something powerful and invisible, exerting its energy all around us.

Some people – spiritual people, people who believe in the flexing might of a mysteriously veiled higher power (including, but not limited too, white people with dread locks, people who drive Volks Wagon vans, nearly everyone who smokes weed as a lifestyle choice, chics who have fairy tattoos, those who enjoy micro-diets or the raw-food movement, and “freegans”, and a whole bunch of other people, too, like really average, run-of-the mill types) call it “Karma” when something overtly cool and sorta unbelievable happens. Some form of justice unexpectedly comes to pass, or some act of kindness finds its way to a needy recipient. Or when, for example, one gallon of gas stretches into what seems more like three. When this kinda stuff happens in the real world, they call it “good Karma”, to which the appropriate response is, “Oh, totally.”

In the Christian world, the use of the word Karma* is generally coupled with finger quotes. You know, the pumping up and down of the first two fingers on each hand, so that everyone will know that what you are actually saying when you say “it was Karma”, is “It was a God thing**”. *see also “coincidence”, “lucky”, “by chance” **see also “divine appointment”, “act of the Holy Spirit“, “part of His Perfect Plan”

This is weird to me. And kind of embarrassing. I don’t think I will ever be able to get my head around Christian-isms (<---- speaking of which) that fall into play in the church. I really don't. It bugs me, way more than it should I'm sure, but still... I really do see this as part of the great divide that keeps the Church, as a whole, from being inviting, socially relevant, and relatable*. *see also relational

Ok, done rambling. The reason I’m even talking about this, is this: Last night I was “having a chat” with Dylan, and in an effort to avoid making eye-contact with me (this also works when confronted by a wild animal), his eyes fell upon a peculiar sight. Something, that under normal circumstances, is easily explainable, but when considering my last blog, seems quite the contrary. At first, I was horrified, then satisfied, and in the end, almost giddy with the pleasure that comes with seeing justice done in truly spectacular style.

Friends, behold – the crusty rotten carcass of a chameleon squashed to smithereens* in the frame of the bathroom door: *see also “steam-rolled”, “flattened”, “meeting its maker” 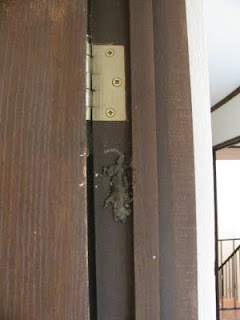 I have no answers.

Cosmic Karma? Divine Justice?? Stupid Luck???
If it was Karma, was it my good Karma, as in, ‘pay back’s a bitch?’, or will it become my bad Karma, as in, ‘you murdered something and smiled about it – better watch out!’?
Or, was this an act of the Holy Spirit? or, maybe the Devil himself? I mean, can I really see God orchestrating a death like this?

I don’t know. What do you think?