Seriously? It was like my favorite day in a really long time. And that’s saying a lot because last night El Chupacabra and I went out to dinner with our friends, Brian and Theo, and we laughed so hard and so loud that people were staring at us, and some were pointing and whispering. But in defense of the pointer/whisperers, and with great apology to other North Americans who live around here, we were being a bunch of obnoxious Gringos, and we did take pictures of other patrons with our phones (ok, that was just me), and, worst of all, Brian and Theo absolutely wore matching Chacos. Oh, and at one point I earned the title of “just one of the guys” (later recanted when I said something about slitting my wrists if I had to hear one more “that’s what she said” joke). So anyway, very fun night with two really cool guys who inexplicably left their even cooler wives at home for this trip. But I forgive them, cause I’m just good like that.

So, today!: The football team that El Chupacabra is coaching had their first game!
It wasn’t like a real game, just an exhibition fund raiser for the Costa Rican Children’s Hospital, but the guys actually took the field in their uniforms and helmets, and there were refs there – with striped shirts and whistles and flags and everything. And, just so we’re clear, I’m talking about North American style football. Yes, here, in Central America. So basically, my husband has taken on the role of coaching guys (over 18) to play a sport that most of them have never played, never learned, and rarely seen on TV. That’s awesome, right? They seriously have NO IDEA what they’re getting themselves into. And they got ~crushed~ today. But that’s not why I’m happy. I’m happy because I love watching El Chupacabra work it. I LOVE IT. And today I got to see him at his best, engaging in something he loves, investing in a group of guys, analyzing, processing, teaching, encouraging, and leading in a way that I’ve never seen any other man do with such exceptional grace, and exemplary skill. Oh, and then there’s this: 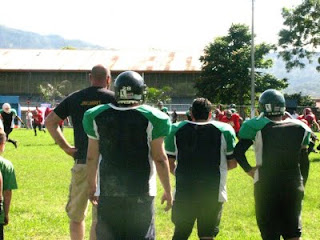 Listen, I’m not here to brag or anything…but see that big guy there? The one with the extra-large “Jaguars” t-shirt stretched over his massive frame? That’s him, El Chupacabra… and HOT DAMN! That’s mine!

I spent hours, today, just watching him. It reminded me of sitting in the bleachers at his college games. Of course, back then I had a squirming baby in my arms (And today, as I choked on my heart, that very same baby left me alone in the bleachers to sit somewhere else with a very pretty girl…Teenagers suck). Speaking of teenagers – the first years of our marriage probably could have been studied and used by the military to enhance psychological warfare tactics. It was that messed up. But, when I sat in the stands at his football games I felt nothing but pride. When he took the field, nothing but concern. When his team lost, nothing but compassion. When they won? Pure, blissful, JOY. I’m pretty sure that game nights were, like, the only “healthy” nights our early marriage enjoyed.

So to sit behind him at the game today (now that I actually like him) was pretty cool. Except that this time I was the proud coaches wife, which, in my opinion, is like a step up from being a college football player’s “baby momma”. So that was nice, too. But, mostly, today reminded me of how lucky I am to be on El Chupacabra’s team. So I made this:

1. Um, did you see that picture? You might wanna go back and look again…. Yeah, that’s what I thought.

2. El Chupacabra can do anything. I’m not even kidding. I’ve seen it with my own two eyes. The other day, when my Mac charger petered out, he took the thing apart, snipped off the end (yes – I had a freaking heart attack!!) and made a new one. And I was like “What. the. hell. Who does that? Who knows how to do that?” And he can braid hair. And sew. And he can weld. He can run fiber optics cables. He can fix car junk. And he can do math. Look, I cannot even begin to get across how much of anything he can do. He can do, like…all of it. 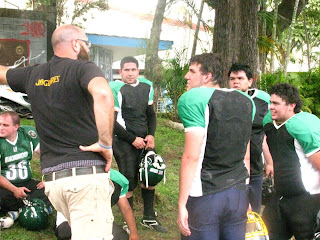 …a lot of guys look at him like this. I’m not sure if it’s admiration or if they are actually kind of crushing on him, but that look in their eyes…that‘s it. That’s reason number three.

4. El Chupacabra is huge. Huge. HUGE. And that makes me look really teeny tiny in pics. And also, it makes me feel safe – well, actually – it makes me safe. Because nobody effs with a giant.

5. This mythical creature rocks a beard of mythical proportions…in the tropics. (He said to me the other day, “Hey babe? If I get the swine flu and go into a coma – DO NOT let them shave me! I mean, like, my beard, cause that would be some quality undisturbed growth time right there.”) 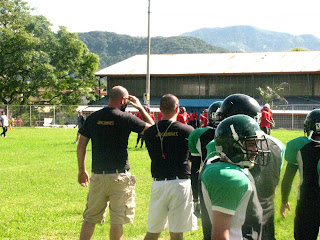 His arms don’t even hang down at his sides like a normal man because his lats won’t let them. And he’s not even working out right now.

10. This is my absolute favorite thing about him: Everything El Chupacabra does – in his home, in his work, on the football field, in Costa Rica or in the U.S., at church and on the street, in front of people and in private – he does in obedience to God. He moves through the world, all six and a half feet of him (!), with easy Grace. With loads of patience. With a clear purpose and a high calling. And he requires no thanks, hoping only one day to hear, “Well done. Well done…My good and faithful servant.”

I saw it out there, today. He stood in the blazing sun for hours with a bunch of guys who will probably never be very good football players. He patted them on the back, he slapped them on their helmets, he ran them on and off the field. He put his long arm around them when he told them how they were royally screwing up. And when one of his players dislocated his elbow, El Chupacabra protected him – literally – picking up grown men by the backs of their jerseys, and tossing them away like midgets (which may have something to do with #8, but i’m not saying). And, then he stayed til long after the game ended, to make sure that all of his guys were taken care of, even though he was tired and hungry, and even though his wife and kids were bored and ready to leave. He stayed until the job was done. Not until the coaching was done, but the whole job. His job of loving and caring for these guys, of building relationships with them, learning about them, meeting their girlfriends, their parents, shaking their hands, saying a million times, “Good work out there today. Good work!” 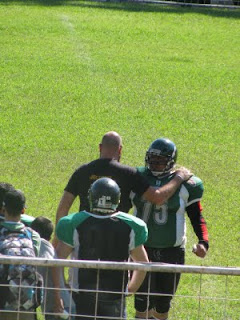 His team has won, and they don’t even know it yet.