Me and my bitches; An object lesson in Worship

Have you ever seen that episode of The Simpsons where Bart says “How the hell can I talk about hell if I can’t say hell?” Just wondering…

So anyway. I have two dogs. They are adorable, lovable, incredible nine month old mutts that we adopted off the street at 8 weeks old. They are my babies. And I don’t want to brag or anything but they’re pretty much amazing. Like, cutest-doggy-woggies-in-the-entire-world-and-not-just-the-third-world kind of amazing. And they’re bilingual. And they’re smart. Ok, one of them is smart. But overall, they are both just really great dogs.

Their names are Gringa and Osita, but El Chupacabra calls them “yerdogs!”, as in “Look at what yerdogs did!”. And I call them “my bitches”, which is awesome, because it’s a technical term (therefore “Ok”) and when they jump on me, I can say “Get off me, bitches!” This makes El Chupacabra roll his eyes because he’s pretending that he never acts like a stupid idiot for hilarity sake but on the inside he thinks I’m really funny and I know that every time I do something that makes him outwardly groan inwardly he falls a little more in love with me which basically explains why we’re still married and also why he is constantly rolling his eyes and sighing very very heavily.

Anyhoo, it’s hard to explain, but these two pups have made Costa Rica feel more like home than anything. Weird, huh. What can I say? I love my bitches. And they love me. In fact, I’m pretty sure they worship me. Like, to them, in their little tiny puppy world, I…am God. Oooh, I felt kind of dirty writing that…*shudder* But, think about it; I am the provider of all things. I’m the master of their domain. I open doors, and I shut them. I give and take away… just like that song from the 90’s. I am the way, the truth, and the li….KIDDING!! Just kidding! Relax… it was a joke…

No, but my point is, that I am in charge. They know it, and I know it. And they love me in insane ways because of it. They love me so much it makes them freaking crazy. Like berserk. Our first encounter every morning has them doing back-flips and walking on two legs, and I swear, trying to speak – like human words– with their floppy dog lips. I’m just waiting to come down one morning, unlock the back door, and swing open the gate to find them both wearing top hats and tap-dancing ragtime to “Hello! Ma Baby!” – They are that happy to see me. But it’s not just first thing in the morning. They’re like that all day long. They aren’t allowed upstairs, so if I go up, they wait for me with their front paws on the bottom step, tails wagging as I descend. If I go to the store, they wait behind the door and go ape-nuts when I get back. When I go in the laundry room, which is off limits to them, they stand at the threshold, watching, waiting, and when I cross that invisible line back into their world, they go crazy. Happy just to be in my presence.

This is where they are every time I do the stinkin’ dishes: 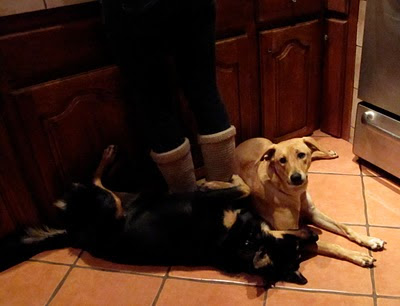 It’s like they can’t get close enough. Like they can’t get enough of me. ok, and Yes, I am wearing ugly crocheted boots that I bought at PacSun for $15 last month because I didn’t have any warm shoes and I really thought I would never wear them again but it’s like wearing slippers…up to your knees…and Oh my God, if someone could crotchet me a huge pair of footed pajamas – with a hood – I would wear it like ALL THE TIME. So that explains the stupid boots. Oh, and I have another story about them….but later.

But the coolest part is that the more mature my girls get, the more they realize that their happiness is directly linked to their obedience. They get to choose. Obey, or don’t. I don’t keep them leashed so that I can force them to “come” when I call them. They don’t actually HAVE to come to me at all. But they want to. Even when they don’t want to, they want to. Because they love me, and they trust that I will be good to them. Sometimes that means obeying even when something else seems better, smells better, looks more fun, more interesting, whatever.

For example; My bitches like to run wild in the streets. Sadly for them, it’s not allowed. As much as they would love to run around with the strays, peeing on every stick and rock they see, it is not what I want for them. For one, I told them, those other dogs are floozies, and secondly, it’s just not safe. And you’d think they’d appreciate my concern. But, they still, on occasion, will try to sneak out for a run with the wrong crowd. To which I respond with one word. Come. Ok, or Venga. Cause of the whole bilingual thing, so I guess that’s actually two words, but you get the idea…

Come…. Then it’s up to them to decide what they’re gonna do.

With Osita, it’s easy. I always know she will come. She can’t even help herself. She puts her head down and her tail starts wagging, and she practically crawls back to me, panting and begging, begging me to take her back, to love her, to be in charge. If it weren’t so pure and sweet, it would be pathetic. But it’s perfect.

Gringa is different. She’ll ignore me for a second and do what she wants. Then she’ll stop and look at me. Then back at whatever has called her away. Then back at me. Then it’s this back and forth tug-of-war between either following her lust, or aligning her own will with her master’s. So far, she has always chosen to come. But, the choice is ultimately up to her.

I hate to compare my worship of God to that of my dog’s to me. Really, I do hate it. It seems kind of simple. And embarrassing. Especially when I consider the fact that these two inbred street dogs kick my ass when it comes to the act of worship….

Do you know how often I express the depth of my love for God? Let’s just say I’ve never danced naked on a roof-top. In fact, my daily greeting to God goes something like this: “Holy Jesus! How is it already 5:30 in the morning? Please God – Let me sleep in!” True story. That’s it, that’s all I give. I pray. Stupid boring, laboriously repetitive prayers, that are so uninspired, so uninteresting, so un…loving. Sometimes I sing. Sometimes. But you know? I never sing of my love for Him. I sing about His love. For me. And I don’t often say, “I love you and I’m so happy to be here with you. All I want is to be in your presence.” I never show Him how much I love him… You know? Naked roof-top dancing kind of love.

And obedience is something else I’m learning. Slooowly. And painfully. But learning. I believe it is the ultimate act of Worship. At least, for me it is. Because I have a rebellious spirit, and I don’t like to be told what to do, even, and most especially, when it is in my own best interest. I can imagine God watching me the way I watch my little Gringa. Torn between what I want to do, and what He wants for me. Waiting patiently and lovingly for me to choose. To acknowledge Him as my master, and provider, my caretaker who loves me and who is good. It really shouldn’t be so hard for me at this point. My own experience tells me that when what I want is in line with what God wants, the direction of my life changes drastically for the better. And yet, it is still hard for me to trust this God that I believe, no, that I know, is Good. I still pull against Him, turn away from Him, take my eyes off of Him, and He lets me… because He wants me to get to choose. And still, I waiver.

I think maybe it’s hard for me to obey because I don’t fully give Him my love – the way my silly pups give me theirs, with exuberance, and joy, and abandon. I love them and care for them, they love me and trust me. It’s kind of a beautiful union. But, my relationship with God looks more like this: He loves me and cares for me, and I secretly love him back and openly doubt his desires for my life. Sheesh, I know, right?

So aaaall of that to say that maybe my bitches know a thing or two ’bout a thing or two. I wasn’t even kidding when I told you they were amazing. Now, I gotta figure out how to get on the roof…

The face of worship? Yes, perhaps. 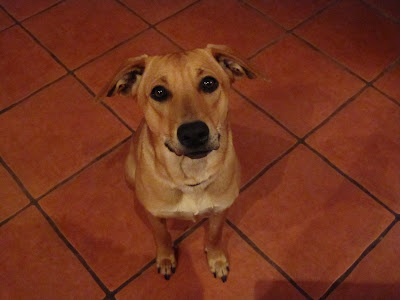