The Warm Fuzzies: Love?… or Parasites?

February 26, 2010 / Jamie Wright / 13 Comments
I love that even though I live overseas (Ok, technically I don’t live “overseas”. I mean, you could drive to Costa Rica from the U.S. if you were so inclined. But if you do, let me suggest that you carry a gun…and some throw-down drugs…and stash all your cash in a body cavity…and learn to say “Please, sir, don’t take me to jail, I’ll do whatever you want.” in Spanish – then you should be alright. But anyway, “overseas” just sounds cool.) …sooo… wait, what was I saying?… oh yeah, I love that even though I live far, far, far from my home church, and don’t get to be there often, I still manage to get in on the action every now and again.
Check this out.
A couple of weeks ago, my pastor asked this question on Facebook;
How do you get to be poor in spirit?
And I commented; 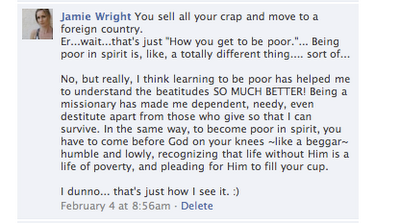 And then – here’s the cool part – when he spoke that Sunday, he used my response in his sermon! Ha!

I know. You’re like “…..And?”
It’s not really that big a deal, but this church is like home to me. It truly blessed me to be reminded that we are still connected…. via Facebook… and Vimeo… Man, the world has grown very small, hasn’t it? Anyway, when I watched the video, it made me smile.
It’s a great message in a series from Jesus’ Sermon on the Mount…

He is very careful to call me his “Facebook friend” and not his real life friend… To which I say, “Pshh – Whatever! I’ve washed my family’s dirty socks at your house. That makes us tight.”

And also, Yes, I am aware that I said “crap” but he said “stuff”. So goes the way of the VWM. The truth is, I wouldn’t say “crap” from the pulpit either. Maybe. Ok, probably. Oh, who am I kidding? I totally would. But I have no expectation that anyone else should. So I’m cool with it.

Anyway. I just thought it was pretty awesome to see that my little family in Costa Rica is still a part of that big family in California.

It makes me feel all warm and fuzzy on the inside. …Actually, that’s probably because my tap water looks like someone took a leak in it…