I’m pretty sure there are rules about these things.

Missionaries are only supposed to tell you about how hard it is to be a missionary. We prefer to emphasize the difficulties of living in a foreign land. We want to make you think that you are the lucky one, and you should be glad we came here so you wouldn’t have to.
And by all means, we are never, ever, ever supposed to post an amazing picture of where we live. A picture of the clouds rolling down off the top of a volcano, with trees coming into bloom over a field of glossy green coffee plants. Of blue skies and sunshine, and a day that is so obviously an 80° day that it might make people who are trembling from cold in other parts of the world weep with envy. And I’m sure it would be even more insensitive to mention that said photo was taken just 15 steps from the missionary’s front door.
There might be a missionary out there, somewhere, that would – for example – do something like this: 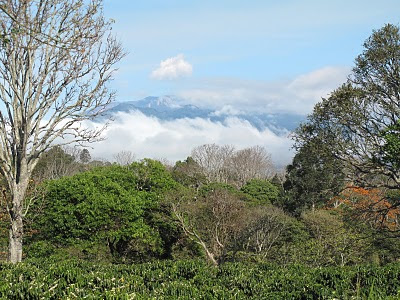 DON’T BE JEALOUS JUST BECAUSE I LIVE HERE! HA!!
But, I doubt it.
That would be incredibly rude. Terribly, terribly rude. Inexcusably rude, really.
I mean, sheesh… some people…
What kind of missionary would even consider doing something like that?…