The one where she says “Pubes”

March 9, 2010 / Jamie Wright / 17 Comments
El Chupacabra ran downstairs recently and, as he slipped out the front door, he said, ” Hey, I left you a present in our bathroom.” And then he was gone…
Naturally, I thought it would be a massive turd.
But no.
It was so. much. worse. 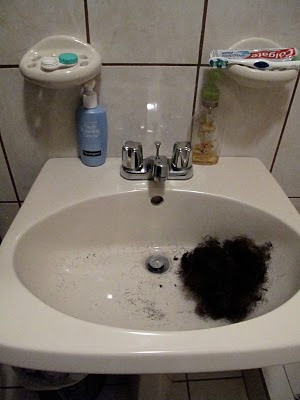 The only thing that would have made this better would have been if he’d added a note that said:

Don’t feed it after Midnight and NEVER get it wet!

Oh, and, just in case you missed it, THERE’S A BEARD IN MY SINK!
Ok. So, we have an ongoing debate in our household as to the specific nature of beard hair. I believe, whole heartedly, that beard hair is actually pubic hair as it arrives during puberty, and shares aaaalll kinds of consistencies with other hairs that arrive during that same time.
I think I’m speaking quite accurately when I say things like, “Um, there’s a pube touching your fork.” or “Whoops, ya got some popcorn stuck there… in your pubes.”
El Chupacabra doesn’t think I’m funny. Like, at all.
He says that I’m crazy because he believes that hair is associated with the region from which it comes, and not the era in which it arrived.
Obviously, he’s wrong.
BUT – since..*ahem*…I am a very nice wife, and I value our relationship more than a little tiny debate about wether or not it’s technically correct for me to refer to him as “Pube beard the wiry Pirate” or “PubyMcGee”, or any of the other brrrilliant monickers I have for the Pubezilla growing on his nether region… I mean, like the nether region of his face… (names that I would love to share with you, but which would, undoubtedly, be frowned upon by a few well meaning Christians who feel intensely convicted on my behalf), I have deferred to his opinion. Yes – I. have. deferred.
So now I just call ALL hair, “beard” hair, like, “Man, the boy’s shower is all full of ‘beard’ hair.” And, yes, I do use finger quotes when I say “beard”. Always.
Anyway, problem solved.
Some things just aren’t worth fighting over. Especially the things that we can’t or won’t have the answers to in this lifetime.
I see people – Christian people – in these wild debates, arguments really, about some of the stupidest crap, and it always makes me wonder what God thinks about that. I mean, about us, treating each other like sh..dirt because we’re so focused on being right, and on sharing our great wisdom with others throughout the course of our miniscule, and relatively very short lives, that we’ve forgotten what matters and what doesn’t.
I dunno. I just feel like some of our very strong opinions might be better left as questions, to be saved, and asked of the only One who speaks not out of opinion, but Truth.
I have this picture in my head of heaven. Everybody always talks about the questions they have for for Jesus – I LOVE those questions! I imagine that there will be a very long line of dead folks, waiting patiently to find out if dogs go to heaven, or if Adam had a belly button. And then you’ll have those guys that always argue for Calvin, or against him. You’ll probably have a whole lot of people with questions that start “In the Bible, what exactly did you mean by….?” And a bunch of conspiracy theorists wanting to know if they were right about butt-probing aliens, or computers with eyes, or the government making us eat tiny robots in Raisin Bran, or whatever.
And then you’ll have me.
I will wait as long as I have to. I’ll have an eternity to get the answer to my question. When my moment comes, I will walk right up to Jesus, motion toward his golden, flowing, kinky beard, and I will ask, “So, is that, like, pubic hair… or what?”
Your turn. What will you ask?