Pretty sure Moldova is stalking me.

Normally not a big deal; I mean, it’s a missionary blog, so naturally, there could be other missionaries reading it and commenting from different parts of the world. BUT. This time was extra special because – well, here’s what I told her in my response:

Moldova!! Annie, you just made my day!!
El Chupacabra and I just got in an awesome argument the other day over whether Moldova was a real place because I said that Moldova is the fake country from Princess Diaries and he was like, “No. It’s a real country.” And I was all, “You just THINK that cuz you’re a sucker.” and I kept saying, all day, how Moldova wasn’t real, until finally he got really mad and googled it and shouted “LOOK! This is the Wiki page for Moldova, the REAL country!!” and I rolled my eyes and said, “Sheesh, you’ll believe anything.” and then he, literally, threw his hands in the air like, “God what did I do to deserve THIS woman?!”

It was all very satisfying. And, yes, I knew Moldova was for real.
I cannot wait to tell him I got a comment from Moldova, of all the places in the world!! So funny!!

Now, tell me that’s not weird.

Of aaaaallll the places in the world – I get a comment, on my stupid, mostly entirely unheard of blog from someone in Moldova, like 5 minutes after the… um… charming incident described above.

But wait. It gets curiouser.

Cause then, something like a week later, there’s another mention of Moldova, from Anne Jackson over at Flowerdust (who fulfills, for me, that odd internet phenomenon of Here’s a person that I’ve never actually met but I like to think that we’d be friends in ‘real life’.) Anyway. Out of the blue, she announces that she’s going to… drumroll please…..Moldova!

I’ve been following Anne Jackson’s journey as she and a few others walked right into the middle of the Sex Trafficking Capitol of the World* (*not its official name). From an unsuspecting cafe in Moldova, she tells the story of how thousands of girls and young women are secretly swept into the dark underbelly of the illegal sex trade and kept in a life a slavery with virtually no help, no recourse, and no hope of escape.

So I was already thinking about slavery, and how strange it seems, to me, that slavery exists today. I was already mulling it over in my head, wondering how we let things like this happen, and telling myself that it’s just because the problem is so far away. Ya know? Out of sight, out of mind, or something like that. And then my husband handed me this paper: 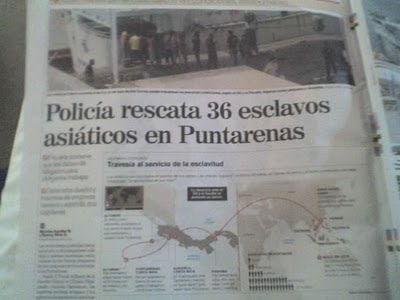 It’s the front page story of 36 asian slaves being rescued off of a Costa Rican fishing boat. 2 hours from where I live. They had been trafficked from 5 different countries on the other side of the world. Beaten, starved, and held against their will for the past 2 years, their story hit a little too close to home. But these people have been rescued. I have no idea what the future holds for them, but at the very least, they’ve been given a second chance. They’ve been handed their freedom.

When I was reading this article, I just kept thinking of Moldova and the thousands of girls being enslaved, abused, and terrorized after being lured into the sex trade. And I couldn’t help but wonder who will step up to help them? Who will grant these girls their freedom? What can be done to rescue them from the atrocities they endure?

And then. I got an email.

It was from Jeff Goins (again, someone I’ve never met, but like to think we’d hit it off in real time- does that make me lame?). Jeff asked me to help get the word out about his friend Tom Davis, who was in – you guessed it – Moldova! So I was like, “Heck yes, I can spread the word – Moldova is like my favorite country right now! It just keeps popping up!” Ok. I didn’t actually say that, but I thought it.

This guy, Tom Davis, is launching this ministry, Children’s HopeChest, in Moldova. Here’s a peek at what they aim to do: 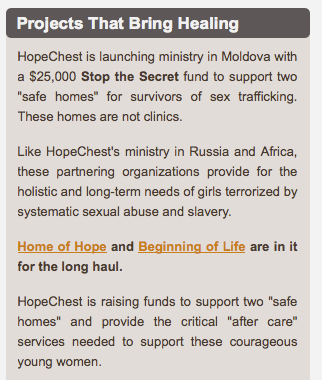 Look. I know I’m not all that activist-y. I’m not even all that nice. And I know that you probably popped in here today hoping for a chuckle and not a guilt trip.

But I also know how God speaks to me. And what started out as a joke about a forsaken little country in Eastern Europe, turned into a nagging feeling that I was supposed to be saying something about it, and when I responded to that feeling with doubt and hesitation, He went ahead and sent someone to straight up ask me to say something. So yeah, I’m slow like that, but I usually get it in the end…

So there it is. Moldova. Sex Trafficking. Slavery. And all the links you need to learn more about it.

And here’s the link to give $…or $$… or maybe $$$, so that a girl halfway around the world can find freedom.