Today I bought a bike that I couldn’t afford

Three years ago, we sold everything we owned. Everything.

When we arrived in Costa Rica, it was with 10 checked bags, 5 backpacks, and the clothes on our backs. That was it. That was all that was left of our possessions. It was hard, but good. And I have no regrets about it.

Three years ago, we also sold everything our kids owned. And that’s kind of a messed up thing to do to a kid. If you don’t believe me, ask a kid. Go on. Turn to the kid nearest you, right now, and say “Hey, kid, this weekend I’m gonna have a giant yard sale featuring all your favorite junk. Ok?”

Did they cry? I bet they cried. I hope you did that to your own kid and not some stranger’s kid in the mall or something. That would be terrible. I mean, not as terrible as actually selling a kid’s entire bedroom worth of stuff in a yard sale. Not as terrible as taking everything your kid has ever touched, played with, or looked at, every book, every dvd, every board game, every Lego, every stuffed animal, every piece of sporting equipment, every bit of camping gear, and every Dollar Store treasure, along with their bed, dresser and bookshelf, out to the driveway to sell for way less than what it’s worth.

That… is a pretty terrible thing to do.

And during that whole agonizing process, my 3 boys -the same kids that I joke around about being ungrateful, selfish, little turd-balls – they never complained, not even once, about the sacrifices they were being asked to make. Not even once.

But we had a plan. The plan was to get here, to Costa Rica, set up house with the basics, some dishes, a little furniture, daily essentials, and then El Chupacabra and I had budgeted a certain amount of our set-up costs to go directly toward things for our kids. Things to replace some of the stuff they had so willingly given up to make this journey.

Partly, we wanted to reward them for their awesome attitudes and for all the help and hard work they had put in to the move. And partly we wanted to help them feel at home here, give them something to come home to, so to speak.

But we hadn’t anticipated the extreme cost of setting up house in a country that boasts a 50% import tax. And we hadn’t foreseen the huge increase in airfare. And we weren’t quite sure of what the full cost of having three kids in private school would look like. And, naturally, we hadn’t planned on having our house robbed, or our car stolen, or our credit card number snaked online and used in Vegas by a guy who I still hope picked up some kind of flesh eating venereal disease on his exploits (and I mean that in the most Christian way).

Before we knew it, we were wiped out.

Our kids slept on mattresses, on the floor, for the first two years that we lived here. That’s not exactly the “thank you” we had had in mind, when we embarked on this adventure.

We have been, slowly but surely, building a home. It’s true that it sometimes has the look/feel of a college frat house (minus the vomit stains and the sour smell of weed in the upholstery) with laundry hampers doubling as bedside tables and stainless steel kitchen shelving standing in as closet space. We stack books on the floor, we cut our entire lawn with a weed-whacker, and we have broken all but 3 of our drinking glasses.

But today, even though it seems like we need a whole bunch of other stuff more, we bought a bicycle.

For today was my fair haired boy’s 10th birthday.

And this kid, who has given up so much, who has adapted so incredibly, who has taken on a new life so willingly, this kid who has taught me so much about trust, and faith, and who has reminded me time and time again of what is really, truly important in this messed up world, this kid deserves a bike.

Because he traded his in for something better, 3 years ago. 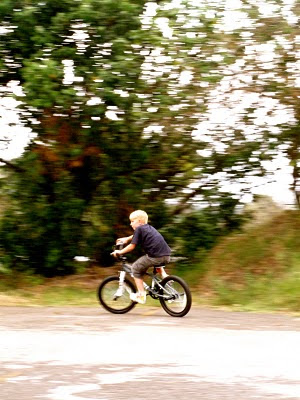 Happy Birthday, baby! I am so proud of who you are!!