This is a test. Or an opportunity.

This is a test… I mean, it’s an opportunity.

I just added a new comment system on the VWM. At least I think I did. I’m not sure, and I won’t be sure until you say something in comments.
So, this is a test. A comments test. It WILL be graded. On a curve.
If you’re wondering why I’m adding a new comment thingy, it’s because A) Sometimes you guys say things that make me smile, or cry, or cringe, or sigh, or laugh, or roll my eyes, but mostly smile, and I don’t see it until, like, 5 comments later and I’d really like to give you an “attaboy” or an “attagirl” or an “attatrani” … or whatever, but I have weird guilt issues if I don’t comment back to everyone in between and that just feels kinda forced, ya know? but also, B) I’d love to see all y’all talking to each other so we can be more like the Very Worst Community, and C)…nope, that’s it, just the 2 reasons:
So I can talk to YOU, and so you can talk to EACH OTHER…...but only if you want to, no pressure or anything. (Ok, actually? There is pressure because I really need you to help me with this test.) You are officially being pressured to say something in comments….and it better be clever… or we will all point and laugh directly at you because I now have a comment system that makes it possible. I think.
No, just kidding. Say whatever you want. It can even be super lame.
Here.
If you need something to point and laugh at you can use this tragic picture from the day I accidentally left the house dressed like Princess Leia on the planet Hoth (at least that’s what I’m told by Nerds-Who-Know-These-Things). 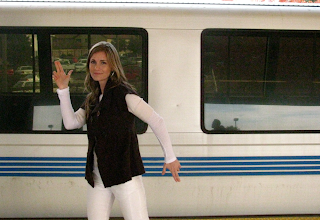 Worst outfit ever.
I was even gonna write a post about it called, Wearing the Full Armor of Princess Leia. But I didn’t for obvious reasons. You can talk about that if you want.
But how about, in keeping with the theme of this blog and in the name of “worsts”, you just share the WORST movie you’ve ever seen and why. That’s not hard. And it’s a good way to see who would like who in “real life”. Right?
Ok. Let’s do this. If you’re nervous, don’t think of it as a test – think of it as an opportunity to be heard, or to introduce yourself for the first time, or to make fun of my outfit.
Or to tell us; The WORST movie I’ve ever seen is….