July 16, 2010 / Jamie Wright / No Comments
The 16 hour bus ride wasn’t ideal. The five of us were spread out from the front of the bus to the back, shivering in the arctic cold, and as if we weren’t miserable enough, they showed dubbed movies featuring Wesley Snipes. After a four hour stop at the border, and a short prayer to die quickly of heat stroke, we re-boarded our wintery coach to find we had each been gifted a paper wrapped sandwich. Ham and cheese with pink saucy stuff and little bits of pickles. Mine was missing the ham part. 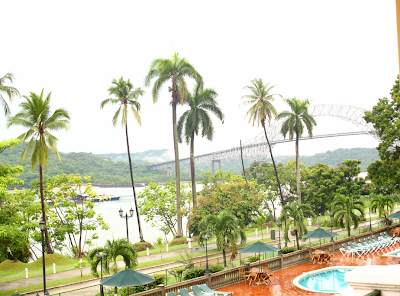 We could not wait to get off that bus and checked in to our hotel. (Which had been chosen based on affordability and the fact the they allowed me to book a room for 5 people – not a room with room for 5, mind you).
Imagine how pleased we were when the pulling back of those awesome hotel black out curtains revealed that our room had a view of THE Panama Canal beneath the Bridge of the Americas.
Try and tell me that’s not AMAZING! 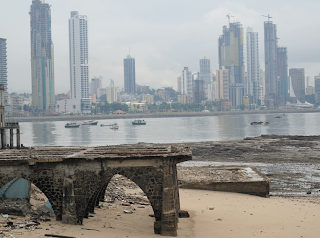 Panama City is a thriving metropolis…. 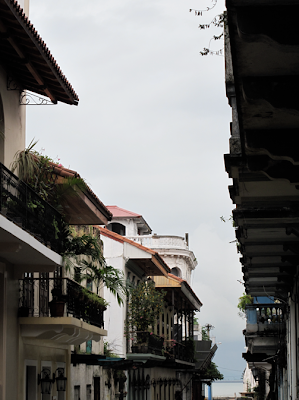 ….and a colonial relic.
It just depends on which direction you’re looking. 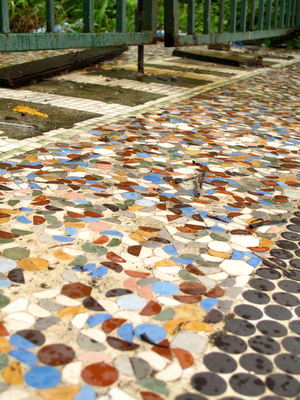 Ok. I just have to show this because I fell in love with this old mosaic floor.
The building to which it once belonged has long since fallen away to rubble, but these tiny tiles remain in the entry. As welcoming as ever.
I know, I’m corny, but I really, really, really like it.
Most of the trip, we looked happy, like this: 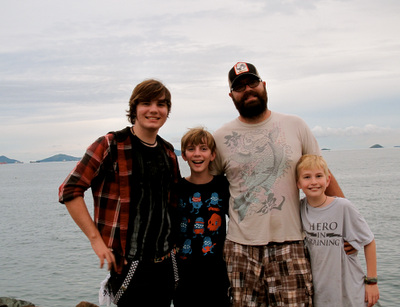 This pic was taken juuuust before we accidentally walked 8 miles back to our hotel to save the $2 cab fare. In defense of our stupidness, we were told it was only 4 kilometers.
We made it back in the pitch black with bats swooping around our heads because of a big fat power outage that cut out all the lights along the path. Creepy.
Then, no one was smiling.
But, man, I LOVE this picture!
Now, I give you this shot to serve as proof of two important facts: 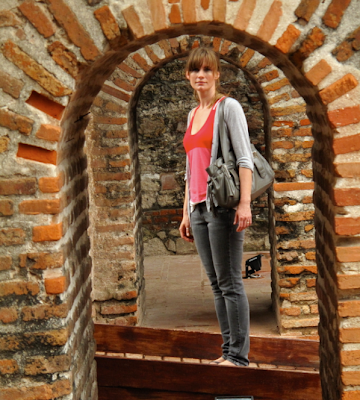 1. I was there.
2. Long bangs are super cute, unless it’s totally hot and humid. Then they just make you look like a greasy dirt-bag.
This was BY FAR the biggest disappointment of the trip: 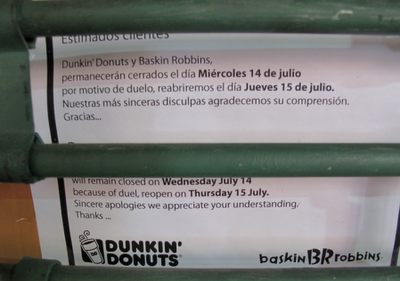 Yeah, someone decided that closing Dunkin’ Donuts for the day was acceptable. Which obviously ruined my plans to carry a million dozen back into Costa Rica with me. Jerks.
My favorite quote: 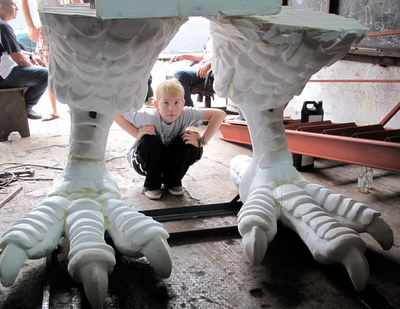 “Mom. I checked. They don’t add the junk ’til they add the giant chicken.” – Jamison
“It’s like his belly was giving my belly a hug. *yeesh*” – El Chupacabra
“I prefer my shrimp not in the form of popcorn.” – Jamison, again
“Panama City is the Miami of the south, except more English is spoken.“
– Hotel guide book
“I’m a gordita, but I need to be comfortable.” – the lady in the bus seat next to mine, while unbuttoning and unzipping her pants. In my face.
And then there was this whole episode where, as a family, we invented an entirely new super hero who goes by the name of Captain Sturdy Turd and can build a hardy, life-saving dam faster than you can say ‘who’s yer daddy’. I’d tell you more, but it seems to teeter on the edge of not-safe-for-work… especially if you work in a church. So nevermind. Forget I ever brought it up.
Anyway….
I feel weird about saying this because I’m really bad at talking about money, but I’m gonna do it anyway because this needs to be said. While we were there, and even before we left, people started clicking on that little Paypal button over there ——–> and giving us money to help with the unexpected expense of this trip. I cannot even begin to say how incredibly grateful we are for each of those gifts. And we want to offer a heartfelt thank you to each of you that gave simply because you saw a need that you could help meet. That kind of selflessness truly does inspire me. Sooooo….Thanks!! both for the gift and for the inspiration!
So now we’re back. And we’re no longer illegal aliens. Whew – that’s a relief! And we had an insanely fun, crazy, relaxing, adventurous time in Panama City, reconnecting as a family. So, in addition to the whole renewed Visa thing, we had this whole renewed relationships thing going on.
It was cool.
It is cool. And it’s good to be home…
(Oh, and I promise to write a real post soon. Promise!)