I’ve never smelled a dead body…that I know of.

But if I had to guess, I’d say it smells an awful lot like the inside of my car. Ever since Sunday when I spilled 2% milk in the backseat, the smell has been indescribably gag-worthy. It sort of makes me want to cry.

Not that it smelled good in my car before the dairy disaster. No, this 98’ Hyundai Galloper used to bear the unique mark of its most usual cargo; men, young and old. So, yeah, it was already kind of disgusting. I mean, I don’t know if ‘that’s-what-she-said’ jokes qualify as an odor, but that’s definitely what my car smelled like. Kinda like a lingering fart with sweaty, nutty undertones…

And I’m thinking about setting it on fire.

Unless you have a better idea.

The funny thing is that this car has been through so much already. It’s sad to think that a quart of milk might be it’s undoing. It’s been stolen, and crashed, and the head cracked in half, and the a/c petered out, and 3 out of 4 windows refuse to go up and down, and sometimes the headlights don’t work. And it squeaks a lot. So it’s kind of embarrassing in the parking lot at the mall because everybody stops to stare and small children cover their ears, as I bounce by in my Galloper, squeaking and squealing and screeching into a spot. But even with all of the problems, this car has been good to us. 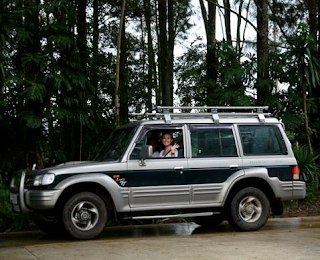 I think the moral of this story is that everything I touch turns to crap.

If I set my car on fire, I’ll rewrite this to include something about the stink being like sin, and how we need to subject our lives to God’s refining fire. As it stands, I’m having trouble seeing God’s hand in the nausea created by the stench of rotten milk perfumed by a half gallon of Febreze and a vanilla scented pine tree hanging from the rear view mirror.

It’s making me sick just thinking about it.

So let’s take a vote: Torch it? or Live in horror?

You know what this reminds me of? How weird it is to see couches on the side of the road that have been burned until nothing remains but the frame and springs. I always think, “What kind of crime do you have to commit on your couch that makes you say ‘take it out and burn it’. I mean, obviously, something horrible happened on that couch…” But maybe I’ve been wrong all this time. Weird, I know. But, maybe no one’s been murdered on all these crispy couches and they’ve just been set ablaze because of an unfortunate spill, which would be totally understandable, and forgivable, too.

No, really, please tell me how to get rid of the stink. Before it ends up causing a divorce…or a fire.