Mugging for the cameras.

It turns out that our favorite thing to do at Disney World was ride roller coasters. I know- big surprise.

But it wasn’t the actual ride that got us all excited. It was the camera that flashed in our faces right before the vertical drop that had us going back for more. We could hardly wait for the ride to end so we could check ourselves out on the little TV screens near the exit. We thought we were hilarious. I’m sure everyone else thought we were idiots.

Ok. We were idiots.… 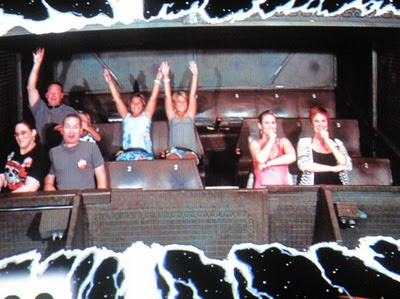 …but we were idiots having fun. 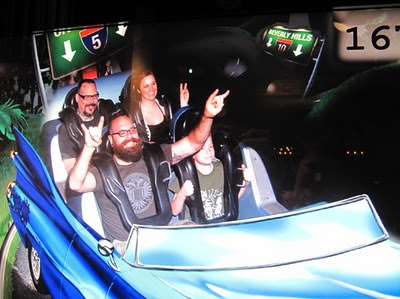 We were joy-filled idiots with the breeze in our beards. 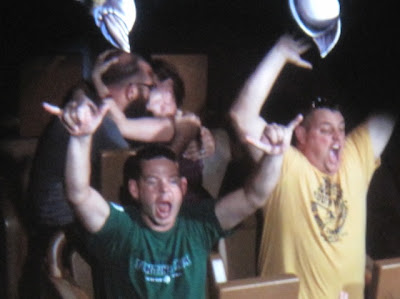 We were love filled idiots who’s kids were grossed out and totally embarrassed. 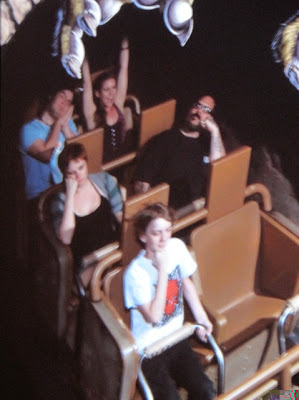 I was the idiot who didn’t get the memo when her idiot sister shouted “Everyone look bored!”

Mugging for the cameras became the thing that had us running through the winding trails of empty lines as many times as possible in the last minutes before closing. It was the most fun I’ve had in ages.

It’s funny, though, the things we’ll do for a snapshot, the faces we’ll make or the poses we’ll strike for one moment in time. Things we wouldn’t otherwise be doing. I mean, El Chupacabra is smokin’ hot and everything, but I don’t make out with him in public. We only did that to get a reaction from our kids (and, Oh, how it worked!) But you’re not gonna find us sucking face at a stop light, or groping each other in line at McDonalds. What I’m getting at is that that’s not how we normally act. That’s just how we act on roller coasters with cameras.

After roller coaster photobombing, people watching was probably my second favorite thing to do. And there is no better place on the planet to people watch than a place where every type of person under the sun is trapped in a single line. Entertainment abounds!

So, I was watching this guy ream a park employee while we waited in line for Space Mountain. He was pissed because they’d been in line and they missed the light parade, so he was screaming in her face about it. When he realized everyone was staring at him, he quieted down and said to her “I’m sorry. I’m not angry at you, I’m just frustrated.” And I thought “Dang, I’d hate to see you when you are angry, Freak.” And judging by the look on the employees face, she was thinking the same thing. Either that, or “What?! You had to wait in line?! Welcome to Disney World, Dumbass.”

Anyway, I wondered how his roller coaster pic was gonna turn out, how his Disney vacation would translate in pictures. The truth is, it was probably great. It probably showed a family having the time of their lives with their hands in the air and their hair blown back. I bet no one will ever mention how Dad lost his shit in line for Space Mountain.

But the worst part is, I could kind of relate.

I mean, I’ve never chewed a Disney employee a new one. -But- I have totally been that Mom who freaks out on her kids to get them out the door on a Sunday morning, then manages to plaster a smile across her face for the church masses. I’ve absolutely been the wife that cannot stand her husband’s face, but quietly slips her hand into his as they walk into the church lobby, for appearance sake. I’ve been the friend that has talked smack behind another’s back only to warmly embrace her at Bible study.

I can honestly say that as a Christian I’ve wasted much time and effort mugging for the cameras. As if my faith were only lived out in snapshots for a Facebook album. As if playing “happy family” for an hour on Sunday morning had more value than putting in the effort to actually live in a way that made my family happy.

When you’re just mugging for the cameras, Faith is easy to fake.

But I quickly learned that when I wasn’t preoccupied with thoughts of “How is this gonna look?”, the ride itself was a lot more exhilarating.

I long to enjoy God with that kind of abandon. I want to live out the kind of Faith that puts off false pretense, rather than adopting it. I want to be thrilled by the path that God has placed me on, and not preoccupied with how I look while I’m on it.

It’s time I put my hands in the air and free fall into worship
like nobody’s watching. 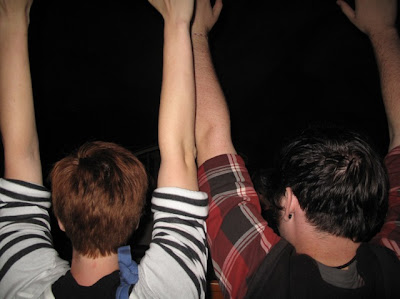 Wanna join me? There’s no wait.