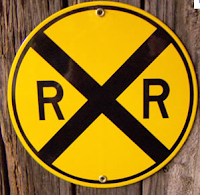 Costa Rica doesn’t use railroad-crossing guards. You know what I’m talking about? Those pole thingies that drop down in front of train tracks to keep cars and busses and junk out of the way – thereby preventing insane levels of death and gore…and spurting blood. Yeah, they don’t exist here. I don’t know about you, but I’m a fan of any and all things that keep my body parts attached to me. Naturally, the lack of crossing guards completely freaks me out.

Although, I can’t claim that Costa Rica takes no precautions when it comes to trains and public safety. The trains are generally very slow moving. And there are flashing lights. The problem is that the lights are always flashing. So instead of saying “Warning! Warning! Here comes a train!!”, they say “Hi. No cause for alarm. We do this all the time.” The train has a bell, too. It sounds like a Little House on the Prairie dinner bell. So you hear this Ding! Ding! Ding!, and you think ,“Either there’s a train coming, or it’s time to warsh up for Ma’s supper, Half-pint.” But mostly the bell just makes you hit the gas cause if you get stuck on this side of the tracks, that damn train is going to make you late to pick up your son who is at the mall. Alone. With a girl. Totally not ok!

I ignore the flashing lights because I see them every day, and that bell is so innocuous, I pay it no mind. As for the guy? I figure he’d be a little more frantic if there was really any risk. Right? He’d wave his arms or something. So I thump, thump over the tracks thinking to myself, “I’m fine. I’m safe. That guy’s not even waving his arms.”

I really wish there were crossing guards here to protect me from my own stupid, shortsighted logic. Because even a slow moving train will *F* you up.

I have a bad habit of letting things creep up on me because I’ve miscalculated the danger. I say “Look at all these precautions I’ve taken to keep such and such a sin out of my life! Look at all these lights and bells! Look at this casual reminder! I have aaaaallll these things in place to tell me that this or that isn’t good for me!” And, with that, I trick myself into thinking that I can step into that territory. I can zip across the danger zone without getting smacked, flattened, crushed to bits. I want to believe that I can look my sin in the face while it inches closer and closer but I’ll be ok, I’ll get away unscathed.

Maybe because I’m stupid (more likely because I’m human)…. but sometimes I need something… or someone…to stand in my way for my own sake. I’m foolish and weak-fleshed and I have a restless spirit that rather enjoys a game of chicken on the train tracks. But when those arms come down – usually in the form of my husband who stands in the gap for me – it’s with a great sense of relief.

Sometimes all the bells and whistles just aren’t enough – the computer programs, the refrigerator magnets, the combination locks, the password protections we put in place to prevent ourselves from stumbling down the wrong path aren’t enough. Sometimes all we’re doing is slowing down the train. And, like I said, if you tangle with a slow moving train, it will seriously *F* you up.

So that’s why crossing guards are awesome.