On meeting an axe murderer.

Remember when I was all “I’m going to meet an internet stranger in real life and it’s totally freaking me out?!”

But I’m honestly not surprised to report that during our visit no axe murdering occurred. In fact, I felt pretty confident going into it that she wasn’t an axe murderer at all, since I had thoroughly counter-stalked her on Facebook….. And Facebook never lies, right?

Anyway. If you follow me on Twitter you already know all of this because when I got home I posted this:

“She is totally not an axe murderer.” 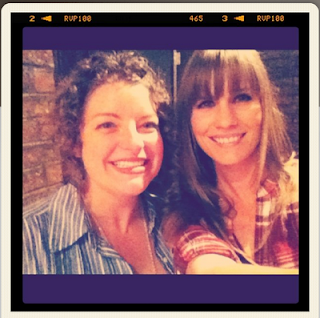 Ok. So it’s not a great picture of either of us – but it does serve as proof that we met.

Here’s how it went down:

She invited us over, and in a stroke of genius, suggested that we get together with our entire families so that “if either of us turns out to be a freak we could always use the excuse of getting the kids to bed on time to make a run for it”. (See why I was willing to meet her?) And then the only thing that ended up working out was for us to crash their Super Bowl party, which we did, on Sunday.

The weird but cool part: When we walked in, this lady by the door smiled and waved, so I was thinking I must know her from somewhere, but I couldn’t place her, so when she walked up and gave me a hug I was super embarrassed because I sincerely could not remember her name, but then she said that she reads my blog, and that she found out about it from a friend in, like, Swaziland, or something. Crazy, huh! (Hi Tona! *waving* It was cool meeting you!!)

The awesome part: We hit it off. April – that’s her name – April is amazing, and fun, and easy to talk to, and an GREAT hostess, and I can’t wait to hang out with her again.

The terrible part: Ok. So remember how the plan was that if anyone was a freak the easy out was “hey, sorry, we’ve gotta leave early.”?…. Yeah. Well, when she invited us over, I immediately said, “Yes! We’ll be there.” But I never bothered to check with El Chupacabra and, as it turns out, he had already committed to watching the super bowl with some of his players. So, we decided that rather than flake out on anybody, we’d flake out on everybody halfway. Which means that we had to leave the Super Bowl party at halftime… In other words, we took off early. And I still feel soooooo bad because I DO NOT want them to think that we were dying to get out of there. Seriously. We weren’t. I promise we just overcommitted.

The VERY BEST part: Both of us liked both of them. You know what I mean? The worst thing that can happen when married people hang out with other married people is that you don’t like both halves of the other couple. Like when you love the wife, but your husband thinks your friend’s husband is moron. Or the two husbands get along great, but you think his wife is a filthy, wretched, scandalous ho-bag. It’s just bad when that happens, and ultimately it’s a friendship wrecker. So I was praying that we would both like them both – and we did! Yay!!

The whole thing made me very happy.

I’ll probably never stop being surprised by the fact that anybody reads this blog. Never. But I’m even more amazed that it has opened up these pathways into the real world, into live relationships, into hugs and smiles and cups of coffee. I gotta say, my running list of “internet peeps I’d like to meet someday” feels a lot more legit and less creepy, now. I probably want to meet you. Unless you’re a weirdo….Or an axe murderer….. But the rest of you? Yes.