El Chupacabra is sore… and scabby.

He has scabs on his knees, scabs on his elbows, scabs on both hands and one shoulder. I don’t know if you’ve ever slept with someone who is covered in scabs, buuuuut, it’s pretty gross. Scabs are oozy. They leave marks on the sheets.

It’s been awhile since I’ve mentioned it, but El Chupacabra is coaching football for the North American football league that has been developing in Costa Rica for just the past couple of years. And well, as it turns out, now he’s a player, too. Yes. He’s 37 years old and he hasn’t played since college, but he’s strapping on the pads to stomp on guys 1o years his junior. So that’s where the scrapes that made the scabs came from – they’re football scabs.

His team took the field for the first time 2 weeks ago. 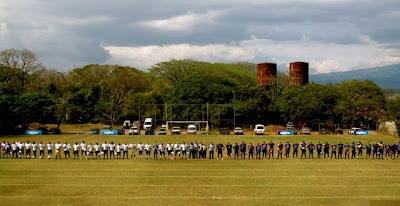 I was proud to see my husband filling the roles of both coach and player, simultaneously. It was exhausting just to watch him but, as I sat in the stands, I found myself kind of inspired, not as much by his aptitude to do both as by his willingness.

Here he is, playing, in the very middle of the fray: 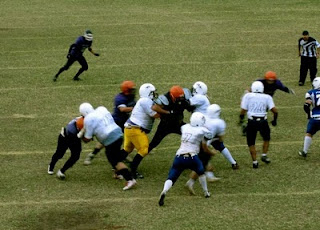 And here he is again, (the bad-ass facing the camera) coaching, rallying his troops: 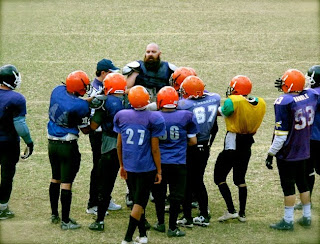 In the past week, as I’ve responded to email inquiries about our work here, I’ve probably used the word “discipleship” about 600 times. It’s one of those funny words that really loses all meaning outside of Christian circles. I hate words like that. I hate it when we “fellowship” instead of hang out and I hate it when we “break bread” together instead of just, ya know, eating. I hate it when we try to distinguish the lines between what is spiritual and what is not. As if it’s even possible to separate the parts of our day into moments which include God and moments which don’t. I mean, that’s just silly. Nevertheless, I believe in “discipleship”…Ok, I usually just call it “friendship”, but whatever.
So I was watching El Chupacabra kill it on the football field until a ref kicked him out of the game for bleeding…. Did you read that? I said bleeding. His elbow was a bloody mess so they gave him the boot. He coached from the sideline while a trainer wrapped his arm, and he was back in before the end of the game. And, like I said, I was inspired. There he was, all sweaty and bloody, driven by loyalty and love for his players – teaching, desiring that they learn and grow as athletes, but also lining up with them against the enemy. And I thought, ‘This is like the physical embodiment of discipleship.” This is what discipleship looks like. It’s not enough to scream from the sidelines. It won’t do. Sometimes you have to be willing to bleed for your friends. To get dirty with them. To fight side by side with them. To wear scabs for them.
Jesus didn’t stand on the shore and shout instructions to the guys on the boat as they weathered the storm. Maybe we shouldn’t either.
In case you haven’t noticed, I’m incredibly impressed by my scabby husband. Now, I’m gonna go change my scabby sheets.
…. …. ….
**This post was sponsored by Jason on behalf of the Team Sanfilippo Foundation. Please go read this blog from a family whose son has been diagnosed with a rare and devastating nuerodegenerative disease. Learn about the Zeighami family, Sanfilippo syndrome, and how you might help find a cure.**