Things have been kinda whacky around here. Here are some tidbits and junk:

This morning I went to run the vacuum cleaner and the most putrid smell filled our bedroom. I looked at my husband in terror and said, “That smells like something dead.” And he said, “Yes. Yes it does…” Then I spent the next hour and a half cleaning the horrible, rotten, death-juices of what used to be a gecko out of my vacuum filter with a series of toothpicks and an unflinching certainty that nothing will ever taste the same again because the smell was so bad it ruined the insides of my face – sinuses, olfactory, taste buds – everything, it’s all ruined. I’m sure of it.
Also?
Our stupid, lame, crappy car, the one that we are so incredibly grateful to call our own, has been in the shop for 3 weeks. I guess it’s something about a fuel injector that was stuck open, dumping diesel directly into the oil which is, apparently, not cool. We’re still waiting for them to tell us if it’s fixable and how much. So that kinda sucks, but what are you gonna do?!
And?
We’ve been fortunate enough to borrow our friends extra car for the last couple weeks. Isn’t that awesome?! We don’t even care that it costs more than twice as much to drive this gas guzzler. We’re so grateful to have a car in our possession that we’ll skip eating meat and we will dry ourselves off with crusty towels from the clothesline for a month in order to fill the tank. But you know how when you’re driving someone else’s car you feel like you have to be extra careful because you would feel SO bad if anything ever happened to it?… Well…. We feel SO bad! We’ve been rear ended TWICE in the last 2 weeks. Twice. In a borrowed car. El Chupacabra was hit by some lady last week, and then, this weekend, I was clobbered by a taxi while I waited behind a bus. The taxi was so badly damaged it was undrivable. Look: 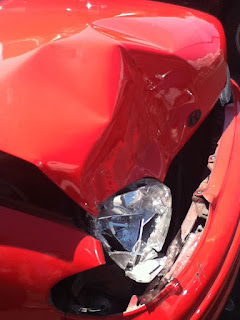 But the car I was in hardly had a scratch on it. I barley even felt the impact. I am telling you, this is the kind of car you want to borrow and then be rear ended in twice!

Oh. And here’s the deal with the last post:

YOU GUYS ARE AMAZING!!!!
I spent the better part of 2 days weeping as my inbox filled with PayPal notifications, many of which were accompanied by some of the kindest, most encouraging notes you can imagine – And they’re still coming in! I’ve been so touched and maybe even a little shocked by the response, vacillating between feelings of deep, deep gratitude and extreme unworthiness all week long. Grateful doesn’t even begin to cover it -Thank you, thank you, thank you!
THANK YOU!!!
Speaking of “thank yous”, I’m sloooooowly making my way through my inbox, first with thank you replies, and then with replies to the many, many inquiries regarding our work here (which I’m truly excited to share). So, hang tight if you’re waiting to hear from me. It will be soon! And regarding the “Sponsor” thingy – I am super excited to have a long list of very cool links to share with everyone. I’ll be highlighting sponsors in the order that requests were received, starting with my next post, later this week (one per post). So, so happy about this! YAY!!

In other news. I’ve been doing some serious PMS eating. It’s downright frightening.

Ok. Last thing. I promise. Have you ever read this? It’s from the Bible:
“An anxious heart weighs a man down, but a kind word cheers him up” (Proverbs 12:25, NIV).
I just wanted to tell you that these last few weeks have been full of anxiety for me. I was thinking about it this morning as I was powering down an omelette AND a bowl of Cheerios AND a banana….(that was before the smell of death ruined my taste buds..) But anyway. Our financial situation, and the broken down car, and the accidents, and my husbands insane workload, and just all kinds of other things – it was all beginning to weigh pretty heavily on me, it was bringing me down. And then I was reading through my email and I was so encouraged, not because you guys were generous with your cash (you were), but because you were generous with your words, your kindness. It cheered me up. Just like it says…right there…in the Bible. For realz… yo?
So thanks, again. You guys are cool. And you’re teaching me so much about who I want to be.
…. …. ….
This post is so random, you should leave a comment that starts, “That totally reminds me of the time…” and then say whatever you want. Trust me, it will fit right in.
….Strangely… this is not the worst post I’ve ever written…