This weekend I’m celebrating the fact that, 17 years ago, my BabyDaddy made an honest woman outta me. 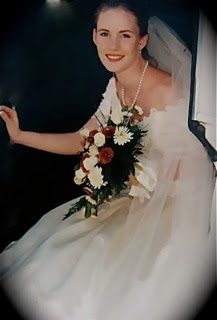 If you think I look like a 12 year-old playing dress up, that’s because I got my dress for $99 at an outlet in San Francisco 3 weeks after having a baby. So it fit ~more or less~ when I bought it, but then I shrunk, so I had it refit, and then I shrunk some more. Also? I didn’t know how important it really is for a girl to get a tan and wear hooker makeup on her wedding day. That’s why normal brides look like women, and I look like a child bride from Utah.

Actually? I was kind of a child.

it’s weird to think that we got married without any idea of what it really meant to Love or be Loved. We were so clueless about the level of sacrifice we were signing on for — Happily unaware that when we exchanged rings, we may as well have exchanged vital organs. Inextricably linked is what we became, albeit halfheartedly, that day.
It’s weird to think that we thought of “two becoming one flesh” as a beautiful and poetic addition to our simple ceremony, but that someday we would learn the depth of those words. That the pain of a broken marriage is as real as the tearing of flesh, the wounds every bit as invasive. It’s kinda weird to think that, several years later, when we both thought it was over, I would remember our wedding day, the words spoken – “a man should leave his Father and Mother and cleave unto his wife” – and finally understand why they called it a “meat cleaver”…
It’s weird (Ok. And sad… And embarrassing…) to think that I asked the guy who married us to please refrain from including Jesus by name. (Seriously. I did that.) And weirder to think that the same Jesus I denied on my wedding day would ultimately rock my world, transform my life, and save that very same marriage. So stinkin’ weird!
And maybe it’s weird to think that a terribly young man in a terrible white jacket could bring so much Love and Joy and Goodness to the life of his little baby bride… 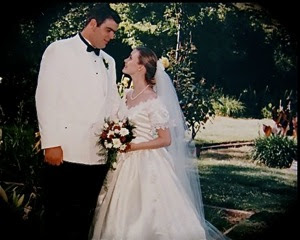