July 15, 2011 / Jamie Wright / No Comments
Taking a break from the short-term missions convo for a sec, because *ugh*, and also, because I posted this pic on Facebook and Twitter last weekend with the caption:
“Where there’s smoke there’s GAH! WHAT DO I DO?! WHAT DO I DO?!” 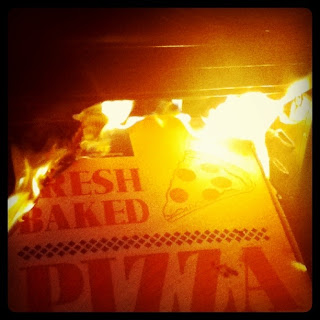 And a bunch of people were like, “Um. Seriously, lady?! You had a fire emergency and you took a picture?”
So I just wanted to explain that it wasn’t like I left the fire to burn freely while I ran upstairs to get my camera or something. I was standing right there, waiting for a pitcher to fill with water to throw on the fire after blowing on it and whacking it with a towel proved to be really bad ideas, so I pulled my ipod out of my back pocket and snapped a pic. No big deal. See what a reasonable/non-idiotic explanation that is?…Whew. Glad we cleared that up.
Surprisingly, only one person asked why the hell was there was a card board box in the oven. Which happens to be the exact same thing I was thinking when I realized that the 5th circle of Dante’s Inferno lay smoldering just behind my stove door.
Turns out that El Chupacabra had some friends over for pizza after football practice and when he went to put the leftovers in the fridge they were all like “No, no, no! Put it in the OVEN!” So, not wanting to break some cultural taboo, or call his friends reckless for lacking a healthy fear of botulism, he did what they suggested (totally what I would’ve done). Then he left, forgetting to tell me that there was a box of pizza in the oven (also what I would’ve done), so I turned it on to make dinner and…. well, you saw what happened – pizza-flambe!
Anyway. It turned out fine. I mean, the pizza wasn’t fine, but everything else was. After a moment of WTF-panic, the fire was out. No worries. But man! Talk about a mess. There was an impressive layer of smoke in the air, black embers all over the kitchen floor, a sprinkling of ash on every surface in the house, and a pool of dark murky water growing at the base of the stove. I didn’t even know where to start cleaning it all up.
The mess was more intimidating than the fire.
I’ve been feeling that way a lot lately. Like I have a few little…situations, little fires, burning here and there, problems that clearly need to be addressed. Some are my fault entirely, some are not. But I find myself too scared to face these things head-on because I know it will be messy. And I know it will take a whole lot of effort to clean up afterward.
So I’ll let it burn a little longer, grow a little bigger, while I grit my teeth against the heat and promise myself I’ll deal with it…. later. Always later.
But, eventually, I won’t be able to ignore it. Just like the pizza fire – which burned my eyes and my lungs with smoke, demanding that I DO something or run – Eventually, I’ll have to deal with this stuff, too, because if I don’t the whole dang house will go up with it.
Yes, I have a few fires in need of putting out. Effed-up relationships, broken promises, unfinished projects, a crappy attitude accompanied by shitty behavior, and the gazillion and 1 ways I’ve come up with to ignore, offend, or disobey the God that I claim to love.
But I’m scared of what will happen, of the mess I’ll make when I finally douse the flames. I’m intimidated by the effort it will take to put things right.
And then I look around my post pizza-fire kitchen, and I can clearly see that it’s better than it was before. All that scraping and wiping and mopping, all that effort to restore what the fire had junked up, was…. well…. worth it, I guess.
I think I needed to be reminded that I am worth the effort.
And, probably, so are you…
…. …. ….
We all have fires burning. Such is life. Can we (speaking for the whole VWM community, here!) pray for each other about this? I’d love to put in the effort to pray for you.