Just your average WTF run to the hardware store.

September 7, 2011 / Jamie Wright / No Comments
I  went to the hardware store with El Chupacabra, and some random guy showed me his wiener.
Naturally, I immediately posted it to Twitter and Facebook. 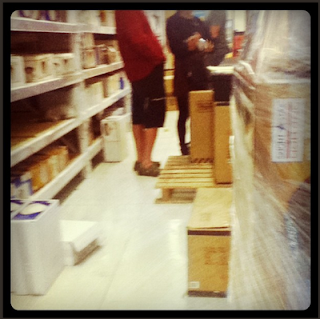 In this stunning, editorial image, you can see the dude with his hands shoved down the front of his pants. What the hell?!
Anyway. The whole thing was so odd that I’m still not sure what happened. Like, was this an unfortunate accident? A poorly timed stretch, resulting in wang exposure?  Did he forget he wasn’t wearing any underwear? Is he just a “free spirit”? (His accent was super weird, he could have been French or something.) OR? Is he a really creepy, sly dog of a hardware store flasher?
Impossible to say.
But, the general feeling I got was that it was an accident… with a touch of perv. Like, it wasn’t totally on purpose, but he didn’t prevent it… and he didn’t hate it.  Make sense?
I found my husband gazing at a wall of light fixtures, and I told him what happened. “See that guy over there, in the red sweater? NODON’TLOOK!… Well. I just saw his wiener, like, the whole thing!… But it might have been an accident. Can that happen? Can a guy accidentally drop trou in a hardware store?… Babe?…Honey?…. Hellooo?”
Of course he responded with sympathy and concern, “Hey. Do you think I should get the lamps with one lightbulb or two? Or those little lights, up there? The white ones…”
He was far less moved by the wiener incident than I was – Probably from being a cop for a decade and having an admirable sensibility for when something is, or is not, a big deal.
So, after I looked at 40 ceiling fans and a wiener, we bought lights and went home.
The end.
….          ….          ….
What do you think? Could the dangling digit have been an accident?
How would you have handled the situation?