“I need you” by Great White.

October 25, 2011 / Jamie Wright / No Comments
My youngest child sings in the shower.
When I say he “sings”, what I mean is that he belts out made up songs at the top of his lungs until I pound on the door and tell him to knock it off because he’s making the neighbor’s dog bark.
I adore his funny little tunes, so I always make it a point to stand outside the bathroom door for a minute, before I make him shut up. His songs are shamelessly loud, and sometimes his lyrics are kind of embarrassing (particularly his ballads to bodily functions) but when he really gets going, his joy-filled bravado is contagious. In all of his 11 year-old awesomeness, he reminds me to make the art I want to make, and not give a fat-crap if the dog next door doesn’t appreciate it.
Last night, he was in there for like an hour, alternately beat-boxing and singing opera while he soaped up. And then he jumped out of the shower and ran into my room, still dripping-wet, to grab a pen and paper. Two minutes later he handed me this page, and said, “Here. I wrote a song.” And then he went to bed like it was no big deal. 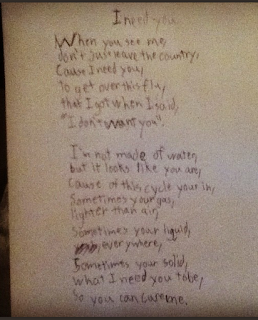 I need you
When you see me,
don’t just leave the country.
cause I need you,
to get over this flu
that I got when I said,
“I don’t want you.”
I’m not made of water,
but it looks like you are,
cause of this cycle your in,
sometimes you’re gas,
lighter than air,
sometimes you’re liquid,
everywhere,
sometimes you’re solid,
what I need you to be,
so you can cure me.
Seriously. My kid wrote that.
I pray that life never pounds this kind of creativity out of him. I hope that he will always feel able to share his God-given gifts with the world as easily as he did last night, when his spirit was so moved that he ran to catch the spillover on paper, and then handed it over to be shared, without fear or shame or any of the other junk that holds some really talented grown-ups back.
I love that.
Plus? I think he’s kind of a rad little genius, and I think he has some real potential to be the next great white rapper…. Ooh, ooh, “Great White” – That could be his rapper name!
…         …      …
Ever been afraid to unleash your creativity on the world?
If you’ve got a blog, an album, a business, a book, a gallery, or some other creative expression that you’d like to shamelessly share, leave us a link!  =)