Proud Wife of the Bearded Giant.

My husband is practically famous in Costa Rica.

Ever since he started coaching and playing North American football we get stopped everywhere we go by people who want to shake his hand, “Hey, you’re that football guy!” We’re walking through the mall and people nod at him, “Hey, Coach!” We’re waiting for a pizza and there’s some old man to say, “I saw your team playing in La Sabana.”  He’s at the DMV and the girl behind the desk is all, “Don’t you play for the Rhynos?”

I guess you could call him kind of… notorious.

Just this morning I was stopped by the guard at my kids school and he said, “Eres la esposa del Gigante Barbudo, verdad?!” (You’re the wife of the Bearded Giant, right?!)

Yup. That’s me. I’m the wife of the Bearded Giant.

Everybody knows who he is. And me? Well, I’m like the base player to his lead singer – everybody knows I belong with him, but nobody really knows my name. Some people might have a hard time living in El Chupacabra‘s shadow (and, if I’m being honest, I’ll tell you that I do sometimes get jealous of his ability to grab life by the nuts), but the reality is that I don’t mind taking the backseat one bit. Actually, I kind of love it.

I’m incredibly proud of my man.

But it’s not because of that oh-so-glorious beard… 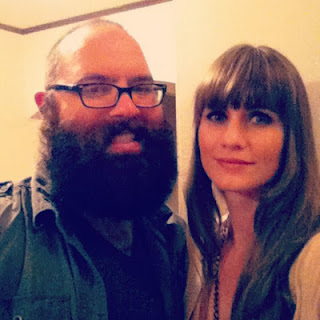 And it’s not because of his above average stature… 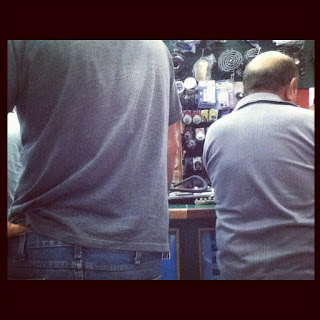 …I mean, I do love these things, and I do think they make his bones totally jump-worthy, but those aren’t the things that make me feel like I won some kind of marriage lottery. Nope. The thing that makes me swoon, the big thing that makes me feel lucky to be his wife – the wife of the Bearded Giant, the Goose to his Maverick, the fries to his BigMac, the Thumper to his Bambi – that thing is that his love for Jesus is unmistakeable.

His love for Jesus is unrelenting.


His love for Jesus is unflappable.


His love for Jesus is uncontainable.

And because of these things, my love for Jesus has become more and more tangible, more real, more mature and more noteworthy.

And, really, besides all that, what kind of self-absorbed a-hole doesn’t like to see their spouse succeed?!  Not this kind. *points to self*

Anyway, aaaaall of that to say that El Chupacabra and some of his players were recently featured on an episode of La Media Docena, which is a Costa Rican sketch comedy show (think Saturday Night Live). If you don’t speak Spanish, this clip will mean nothing to you, so you’ll have to trust me when I tell you that it’s pretty darned funny!

The premiss of the skit is that there was a mistake when the football team’s owner booked a guy to pump up the players with a pre-game speech and they end up with a preschool teacher instead. I think El Chupacabra is a natural.

Yeah, I know… he’s amazing. Hit me up if you want his autograph.

Brag about your spouse – DO IT! Ready…Set…GO!!!
If you’re not married, brag on somebody (ANYBODY) you’re super proud of!