No more of this. 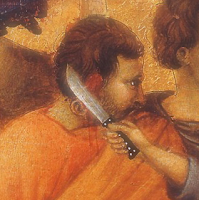 Hey. Remember that one time when Simon Peter was hanging out with Jesus and some other guys, and then Judas (the douche) showed up with a group of Jewish officials and some Roman soldiers to arrest Jesus? So, in his great zeal to serve his Lord and Master, Simon Peter drew his sword and lopped off somebody’s ear. Remember that? Then, the Gospel of Luke tells us that Jesus fixed it. He picked it up, probably blew off the dust, and ‘ZOT!’ – reattached that little sucker.
Good as new. Presumably.
….             …..            ….
Ok. Now, remember way back when, when I wrote a silly post about how short-term teams could be perceived by the people receiving them, and then we had a great discussion about the potential problems associated with the way the Church, as a whole, engages the poor? So we made a list of the 4 most common and compelling reasons people gave for why short-term teams are awesomeand good and should never, ever be questioned. And then I ranted and raved and complained about each of those reasons in subsequent posts – here, here, and here. Well, today I wanna hit the last reason on the list; Reason # 4 why some say short-term teams are super-dee-duper amazing:
“#4. Grace. Duh!God is big and awesome and we suck. He can redeem our valiant but misguided efforts.”
Many people have told me, in regard to short-term missions, if we’re well-intentionedthen no matter what the actual results say, it’s ok – because God will back us up. And some have said that what matters most is our motives;If our motives are pure, then we’re cool – God will have our backs. And others have gone on to say “Hey, we’re human, of course we’re gonna screw up. But we’ve got God on our side, so it’s all good.”
As someone who lives everyday in the radical abundance of God’s Grace, I can hardly argue that God is incapable or unwilling to take our garbage and turn it around.
BUT. (big but)
We should not be using “God’s Grace” as an insurance policy while we run around the planet potentially doing harm to those we seek to serve. “Grace” does not relieve us of liability for the people we run down in our efforts to evangelize. And “Grace” cannot be used to exonerate the Church of its responsibility to engage the world intelligently.
Without fail, when I write about harmful short-term missions, someone takes the time to write me a lengthy email, touting the awesomeness of their own habitual short-term experiences and how much the people love them for showing up – but that even if they did step on some toes, or mishandle funds, or steal paid work from skilled locals, it would be okay, because Jesus is on their side. And then, to drive their point home, they include the story of Simon Peter cutting off a guy’s ear and Jesus fixing it.
Sweet, zealous, passionate Simon Peter, who did something reallystupid while he was whole-heartedly trying to serve his King. And yes, Jesus did, indeed, redeem his valiant but misguided effort…
But do you know what Jesus said beforehe put that ear back on?
He said, “No more of this!”
And do you know who He was talking to?
Yup. His faithful, well-intentioned servant, Simon Peter.
No. More. Of. This.
You screwed up. You blew it. You mishandled this situation. You hurt someone.
No more of this!
And then?ThenHe redeemed it.
Here’s the thing. Nobody is declaring “Short term teams are EVIL!” and no one is saying if you’re gonna do short-term missions, you better do them perfectly. But if we are gonna do this thing, we better be willing to evaluate the process, to look at our mistakes with open eyes, and listen, really listen when God is saying “No more of this!”
Let God redeem what He sees fit to Redeem. Let Him grace what He sees fit to Grace.
And let us stop pretending that what we intendto do is as important to the people around us as what we dodo.
….          …..             ….
Have you ever done something stupid, in the name of Jesus, culminating in a “No more of this!” moment?
(This blog is packed with confessions of such moments in my life!…What?! I’m a slow learner.)
PS. Heheheh…I said “do do”.