I’m ready for my close up.

This is really strange, but, just one month from today, a filmmaker is going to step off a plane in Costa Rica with his fancy cameras and lights and sound junk, which he will then use to follow us around, ask us probing questions, and (I presume) get close ups of all of the dirt, cobwebs, and shower scum in my house.

I am not making this up.
Scott Brignac is a U.S. based film-maker, and he’s making a film about…us!
Weird, huh.
When Scott first approached us with the idea for a short documentary, I warned him that we are positively the most boring people on the face of the planet and that our lives, while occasionally whacky, might seeminteresting because we live in a foreign country and hang out with foreign people, but they are, in fact, not the least bit entertaining. Like, at all. In any way imaginable.
But, still, he thinks he sees a story in us.
So, in a month, we’re giving him a bed to sleep in and the creative freedom to coax (what we hope will be) a worthy story out of us.
I’m kind of embarrassed to admit that the impending arrival of cameras has put me in a bit of a tailspin.
I guess you could say I’m not ready for my close up.
It’s true that I haven’t had a haircut in over a year, and I have flapping old-lady flesh draping the backs of my arms, and my face is aged and wrinkly and icky. Honestly? Getting caught on film will dispel any myth of attractiveness which I may have been able to fake with the help of digital filters and a carefully closed mouth. If Scott Brignac makes this film, you’ll soon know that I’m only “Instagram pretty” and that I have teeth like Kirstin Dunst. It’s tragic.
But that’s not what’s freaking me out.
I guess I wonder what you’ll see, from the outside looking in. It worries me that you’ll see what I already know, which is that things are not as they should be. 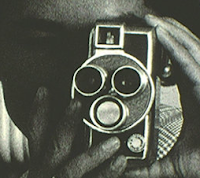 I am not the Mom I should be.
I’m not the housekeeper I should be.
I’m not the Christian I should be.
My marriage is not what it should be.
And maybe I’m afraid that you’ll see, frame by flicking frame, that the brokenness I’ve talked about in these pages isn’t just some clever imagery, some silly metaphor, but the stuff of real life.
Maybe I’m afraid that you’ll see that sometimes we look pretty Godless, El Chupacabra and I. And it’s not because we’re some hipster Christians who act that way on purpose to be “relevant” or something. It’s because we’re just not letting God in, to be part of what we’re doing here on His Earth. We don’t always seek Him, or listen to Him, or obey Him – even when we know we should. We look Godless sometimes because… well, we are Godless sometimes. And it’s ugly. And sad.
And maybe I’m afraid that you’ll see how this life has taken its toll on El Chupacabra and me, and how we’ve run short of Love and Grace and Mercy for one another. Having been married since we were children, we carry with us the tenderness of life long friends, but also the familiarity of inbred cousins. When we argue, which is often, we lose our minds – saying the same things again and again, and ending with a venomous chorus of “Screw you!”, “No, screw YOU!”, “NO, SCREW YOU!!” – until we’re both just too tired to keep shouting about who ought to be screwed.
Not that we would do that if there were a camera in the room.
No, of course we wouldn’t. Because sometimes we’re full of shit. Sometimes we play nice when we don’t feel like it because we know someone is watching. For the most part, our lies are innocuous and silly things to make us look smarter or harder working or better disciplined than we really are. But sometimes they’re just straight bullshit; dangerous, hurtful, self-preserving lies, to cover our sin, to hide our failure, to shadow our most indecent shortcomings.
Maybe I’m afraid that the camera will ferret out our most horrible selves and those who watch this film will be left scratching their heads, thinking, “Wow. She really is the very worst missionary.”
And maybe I should be okay with that.
Maybe split ends and flabby arms and messy houses and the hard stuff of real life are the things that make a great story.
Maybe we can find God there.
I don’t know.
Maybe this broken bullshit world needs more close ups…
….         …..        ….
What would a documentary of your life look like?