This is NOT a food blog! But…

January 24, 2012 / Jamie Wright / No Comments
…I made a Picaken.
A “picaken” is a whole entire pie baked into a whole entire cake. And you can’t just go and make a Picaken and then not talk about it on your blog. A Picaken is more than food… it’s an adventure.
It all started when I was poking around on Pinterest one night and I stumbled upon a Picaken. I thought it was ridiculous and honestly kinda gross looking, so I showed my husband, fully expecting him to agree that, yes, it was absurd and “why would anyone ever do that?!”.
He took one look at it and said, “THAT is what I want, no, demand for my birthday cake!”
And since I’m not the type to let a demand for dessert go unanswered, Picaken happened.
We agreed that a lemon cake with a blackberry pie sounded pretty darn delicious. So using every bit of culinary prowess I could muster, I set about my work, determined to complete the monstrous task of impregnating a cake with a pie.
This is a step-by step guide to the weirdest dessert I have ever made:
Step 1. Bake a pie. Mine was too fat. I should have used less berries.  If you use a fruit pie, you need to really thicken up your filling. If it’s too juicy, your Picaken will… um… leak. A leaking cake is not appetizing. But whatever – just bake a pie. 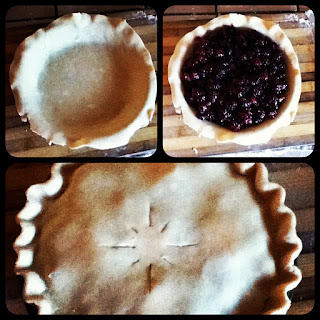 Step 2. Whip up a cake. Any cake recipe will do. Just whip it up and pour the batter about 1/4 inch thick to cover the bottom of your prepared pan (you need a BIG pan. I used a spring-form). 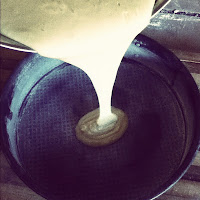 Step 3. I have no pictures of this because I was FREAKING OUT when I did it. But this is the part where you take that gorgeous pie, the one you just made, and you dump it into the cake batter. And then you pour more batter on top. Bye bye, perfect pie.
Also? I’m totally not gonna tell you about how, while it was baking, the cake overflowed like lemon flavored lava covering every inch of the inside of my oven and then nearly killed my whole family by smoke inhalation and then took me 2 hours to clean up. It’s just too discouraging. 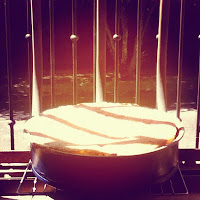 Step 4. Cool the 9 pound monstrosity on the window sill. (I always cool cakes and pies on the window sill because no matter how big the disaster is inside your house, the people outside will see and smell your creation and think, “That chick has got her crap together.”) 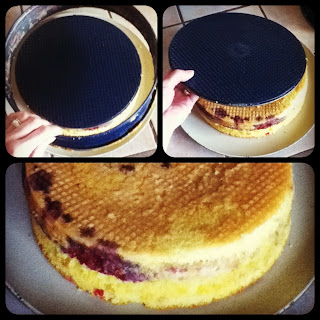 Step 5. Release the PICAKEN! Turn that mother out onto a plate. If it starts to leak, you can just swipe the goopy stuff off with your finger and eat it until you have a stomach ache.
Step 6. While you’re waiting for your picaken to quit leaking, make icing. 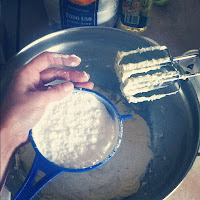 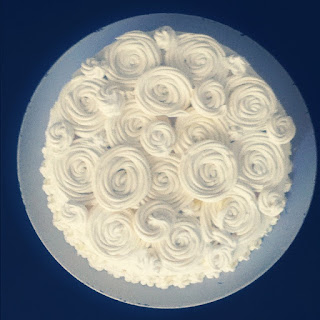 Violá! You’ve got yourself a PICAKEN!!
Here’s a recap – You bake a pie, then you put it in a cake, then you decorate it as if you haven’t just done something really bizarre. 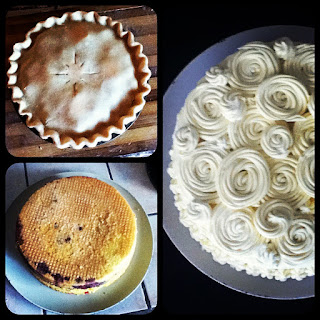 Of course, even sitting there covered in a half inch of buttercream, I had no idea what to expect when we opened it up. To be honest, I really thought that as soon as I cut into the cake it was gonna, like, barf out the pie…
But it didn’t.
It all stayed put… 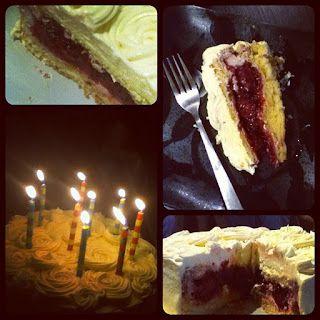 Now everyone in the family wants a Picaken for their birthday. *sigh* Great.

*I will say this; You can easily buy a frozen pie and a box of cake mix and throw this sucker together in 15 minutes flat. But where’s the adventure in that? That’s like riding Disney’s Jungle Cruise and saying you’ve crossed the Amazon. ….But who’s judging?! Not me! Even a half-assed adventure is better than no adventure at all!*

Now, I have to come up with new flavor combos for my February birthday boys. I’m look for suggestions.  What pie/cake combo would you want in your Picaken?!