El Chupacabra wears a tiny dress and goes under the knife.

Let me tell you, you really missed out. I tweeted the hell out of that surgery.
I tweeted when he went in, and I tweeted when he came out, and I tweeted about a million times in between. Apparently, I tweet when I’m nervous.
And I was so NERVOUS!
It was fairly minor surgery, but I couldn’t keep from freaking out. The hospital is super clean and modern, but it still maintains enough awkward, third-worldyness to throw me off my game.
The first weird thing was that they made us give them a $500 deposit before the surgery. This had nothing to do with insurance or deductibles or copays, or anything like that. It was just a “deposit”, which they said would be returned after the surgery. I’m still not sure what it was for, exactly, but we paid it at the bank in the hospital. (And I still think it’s kinda weird that there’s a bank inside the hospital, but ok.)
So we payed the “deposit” and found our way to the surgical ward, where they gave El Chupacabra the biggest gown they could find… 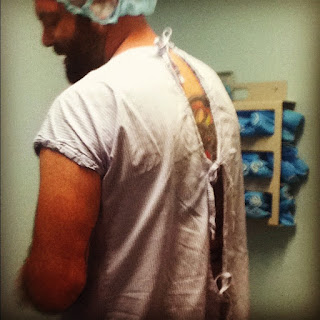 I cropped this photo. You’re welcome.
This gown came down to approximately 3 centimeters below his boys. It was hilARious. So we’re both in the changing room, doing that whisper/laugh thingy, where something hysterical is happening but you can’t just let it rip, so you wheeze and gasp and hold your breath until the laughter shakes your whole body and eventually explodes out the sides of your cheeks.
Finally a little, tiny nurse’s aid came to the other side of the curtain, “Señor, are you ready?”
When he whipped back that curtain, nearly naked, she offered him a fuzzy blanket to wrap around his butt. As I left him in pre-op, I heard him say, “Nadie quiere ver mi culo.”, and then I sat in the waiting room for hours, thinking, “Great. If something awful happens in there, the last words I’ll have heard from my husband will be ‘Nobody wants to see my ass.“
The surgery was only supposed to last an hour, and it was supposed to start at 6pm. But it wasn’t until 10 (just as I had concluded that El Chupacabra was surely dead) that the nurse came out and told me he was fine. Then she said a whole bunch of other stuff that I didn’t understand because it was 10pm and my ability to speak Spanish really ceases somewhere right after 7.
She pointed down the hall and gave me some instructions and then she left.
So I walked down in that general direction and stood there for a minute, confused, until I saw a woman sitting at a desk. By this point I was too tired to give a crap about sounding like a total dipshit, so I walked up to the lady and said (and this is an exact quote), “I’m supposed to go somewhere and do something.” (Nicely done, Jamie.) And that poor woman just looked at me for a second, like “stupid gringos”, but she was really cool and patient, and she helped me understand that I had been sent to get my $500 back, and then she walked me over to the bank and made sure I did it right. Very cool lady. Grateful for her.
When I finally saw my man, he was in recovery but he couldn’t be released because his feet didn’t work. They had given him a spinal block, and it was just taking way longer than normal to wear off.  Actually, I think the doctor explained that to me on his way out, but it went right over my head…

What the doctor didn’t tell me was that when they got into El Chupacabra’s knee, they confirmed that he had torn his PCL and discovered that his ACL is hanging by a mere thread.
So, basically, he needs more surgery – and if he opts to have the PCL repaired, he’ll have to go to the U.S. for it, because nobody here can fix it.
Lame!
But what are you gonna do, right?!
So as I was processing this sucky information, and they were finally getting El Chupacabra out of his tiny dress and into his clothes, the nurse hands me a bag full of meds and starts going over instructions for post-op care – including GIVING HIM A SHOT, once a day, for the next 5 days. 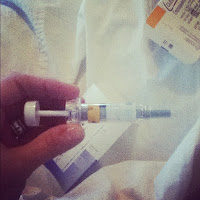 Seriously.
So this morning, I gave my first ever shot. It was awful. But it was also kinda cool. And while I squealed and squirmed and hesitated this morning, as if this was the most barbaric, ass-backwards, unreasonable thing for me to have to do, I know that by day 5 I’ll be all, “What, this syringe? Yeah, I’m gonna give you a shot with it! *poke*” And then I’ll act, for the rest of my natural life, like I’m a badass who will give you a shot just for the hell of it, because I live in Costa Rica and in Costa Rica this is how we do.
Anyway.
Overall, it has been a good experience, and we feel confident in the care that El Chupacabra is receiving. He is feeling good and his knee is healing well.
The stitches oog me out, though. They look like two little dead eyes on a puffy cartoon face… 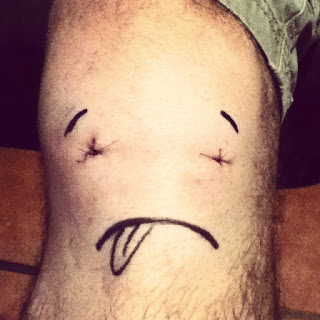 Right?!
Ok. So, all of that to say, THANK YOU for your prayers! And THANK YOU to those who gave generously to help us cover the deductible and other costs associated with this surgery and the next one. This internet community has been a support to us in ways we never could have imagined, and we thank God for you.
We are super grateful for each of you who follows along with us, on this messy, beautiful journey. At least it’s never boring, huh?
🙂
….          …..          ….
I’ve never had surgery. Have you?
And more importantly, have you ever given anyone a shot?!