April 15, 2012 / Jamie Wright / No Comments
Yesterday was Stephen’s last football game. Ever.
It was a tough loss, but a good game. I watched my son lay his whole heart out on the field, giving his strength and his spirit to his teammates. He took orders. He took risks. He poured every ounce of energy he could muster into his game, and even though the team lost, he considers it a personal best. 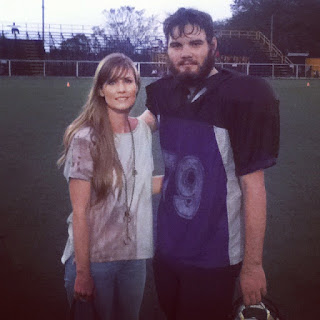 I went to greet him on the field after the final whistle and he said, “Did you SEE ME?!”

Of course I saw him! I thought he was wonderful – but I’m his Mom. He could have been the worst player on the field (or in the history of the world) and I would have thought him a hero. But as we were walking off the field, the head referee stopped us to shake Stephen’s hand. He looked my boy in the eye and said,” You’re a beast. You are a FRIGGING BEAST!”

My son didn’t shrug off the compliment. Nor did he say, “Thank you”.

He looked right back at the ref and said, “I am my Father’s son.”

That I didn’t fall on my knees and weep, right then and there, is a small miracle. I was just so moved by those five words. I wish I could bottle the moment and hold onto it forever as a reminder of that incredibly humble and incredibly powerful acknowledgement.

Our amazingness is never ours alone.

My son was being literal; He gets his natural size and strength from his Dad. He was coached by his Dad. He has his Dad’s propensity for general badassedness. He is clearly his Father’s son. But the gifts and dedication of his Father combined with his own willingness and effort are what make him remarkable.

In the same way, when you lean hard into the gifts that God his given you and when you pour your might, spirit, and heart into those gifts, then you reflect beautifully on your Father in heaven.

You get to lay it all out there! And then remember that Shame and Pride have lost their place in your world – You are simply your Father’s son.

That’s it. That’s all there is.

I write a blog. Some say I’m a writing beast… I am my Father’s daughter.