Somehow, we all lived…

July 19, 2012 / Jamie Wright / No Comments
I don’t even know where to start…
People keep asking me how the move went, and I keep saying (perhaps, because I’m a teeeeny tiiiny bit dramatic), “Somehow, we all lived.” And I know they want to know more, but to blurt out the past month’s adventure feels like some kind of sacrilege. I can’t do it justice. I can’t find words to properly convey the energy and emotion that went into leaving Costa Rica and arriving in the U.S.
I can’t begin to explain how easy it was to get rid of a houseful of belongings; a five-year accumulation of crap and junk and stuff – out the door in a week, without a moments hesitation. But I also can’t say how hard it was to see our little house on the side of a volcano emptied of our family; nearly all evidence of our presence scrubbed away or painted over. Barely a fingerprint left to say, “Hey, you know who lived here?”
I sort of wish I could recount how we wrestled like wild chimpanzees over packing what was left. It wasn’t much, just some clothes and a few mementos for each of us, but if you saw the way we argued and snapped at each other, and how we threw our hands in the air and gave up and tried again and made faces, you would have felt sad for us. You would have thought, “Awww. Look at these poor people with no coping skills.” (And then you would have felt happy because you’re not a jerk who married another jerk and set about testing every ounce of marital fortitude you possess by moving overseas and back again). Honestly, packing our crap felt like jamming a mountain top into a teacup. It was challenging, to say the least.
But we prevailed, I think. We lived.
And, in the end, we checked in at the airport during the wee-est of hours with just ten bags. And a couple of guitars. And one surfboard. And two crated dogs. And a terrible kitty. And several tender hearts.
Honestly, if words could describe the intensity of that single day of travel, I would tell you all about it. But they can’t. Words can only scratch the surface of how stressful it is to travel with pets and kids and a whole bunch of stuff. I mean, I thought flying with a baby was the worst, but dragging a living menagerie and a household remnant across the globe has given me a new appreciation for simpler things, like changing a poopy diaper on the lid of a toilet in a shaking closet.
But I’m not complaining. Because, really? We all lived. 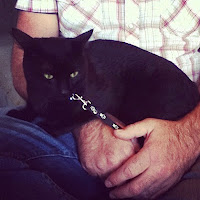 Even Knives, the Dastardly Kitty, who had to be removed from his carrier and walked through security – twice – made it unscathed.
Sure, coming through customs and immigration was no small task, but, somehow, we all made it… and now we’re here, in California… and it’s a week later… and I’m sitting in a coffee shop… totally speechless.
…We all lived.
I’m just a little stunned by the gravity of it. Unable to tell you how hard it was to leave or how wonderful it was to arrive. Unable to paint a picture of how my heart is both broken and restored. Unable to say anything, really, because it feels irreverent to do a bad job telling this story; the Story of how God is moving in my life, and in the world.
Maybe better words will come. Or maybe they won’t. Maybe this last crazy month is a treasure I won’t feel compelled to share. Maybe all of this trial and error, clinging and letting go, all the kneeling down and growing up… maybe it’s just for us; me and my little family of men, to hold onto for ourselves. Maybe we’ll look back and say,“Remember that one month? The one where, somehow, we all lived?”
And maybe we’ll just sigh and leave it at that, because now we understand a little better that to follow God is hard, but we’ll live. And that’s enough.
….         …..        ….
Ever felt overwhelmed by the hugeness of it all?…like you’re not even sure if you’ll make it?