September 26, 2012 / Jamie Wright / 1 Comment
So I’m… like…. a pastor’s wife.
It’s ok. You can laugh.
I’m not technically a “Pastor’s wife” because my husband is a Director, not a Pastor. But his role is pretty pastorly, y’know, with the whole “leading of the flock” bit. And he does pastor duties, and he reads pastorish kinds of books, and a lot of church people call him “Pastor El Chupacabra”, or something like that. So he’s like almost, pretty much, very nearlya pastor.
And that makes me very nearly a Pastor’s Wife… or, *ahem*… a “PW”, as we like to call it in the business.
MTV should totally make a show about us. Like “Mob Wives”, but with less vodka and leopard print bras, and more iced-tea and denim dresses. Doesn’t that sound exciting?!
But, seriously, there should be a rule book or something for us newbie Pastor’s wives. A pocket-guide for navigating those first few months.
Some things are obvious; Like, I’m aware that I should only use friendly swear word stand-ins when I’m chatting it up with strangers in the lobby. I mean, Duh!
But, I went to a Women’s ministries thing a few weeks ago, and there was a raffle. So, without even thinking, I put my stupid card in the stupid basket, and then, when they started pulling names and giving away prizes, a wave of panic washed over me because I realized that I was a freaking pastor’s wife now and if I walked away with a prize I would feel like a real douche. I don’t even know why… I just felt uncomfortable about it. I sat there, imagining how I’d react if I won. For a second I thought, “Oh, I’ll just say ‘no thanks’ and tell them to pull another name.” But then I thought, “It’s all good! If I win, I’ll just run up there, grab my prize, and shout something funny”. And then I got to thinking about how what I think is funny isn’t always what everyone else thinks is funny and how other people might not be amused if I shouted, “HELL YEAH, I WON! I’M A PASTOR’S WIFE, BITCHES!!!” By the time I was done completely overanalyzing the situation, the raffle was over and I hadn’t won. Thank God! 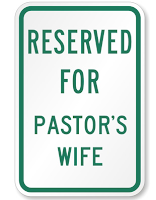 But if there was a manual, I could have just referred to Chapter 3 of Section 1; “Navigating the Ginger & Pear Scented Air of Women’s Ministries, where I would have found an answer and moved on with my life. But no. I just sat there, worrying about how I might actually slip up one of these days and refer to the group at the Ladies Fellowship Christian Brunch thingy as “my bitches”.
Siiiiigh.
See how hard this is? I don’t even know what I’m doing!
I need a rulebook with a foldable tear-out of handy tips that I can keep in my purse. I need advice. Like:
NEVER say ‘nice to meet you’ while shaking hands in the Church lobby, as you’ve probably already met this person 11 times.
NEVER snicker when the head pastor prays that you or anyone else will be “penetrated by the Holy Spirit.”
NEVER ask the coffee servers for a bigger coffee cup because your addiction is ‘off the chain’.
NEVER admit you were late for church because your teenager was ‘being a total A-hole’ and you spent the last 25 minutes screaming at him to change his punk-ass attitude.
NEVER try to embarrass the dirtbag who let one rip during Communion by loudly wondering, “WHO FARTED?!” or angrily exclaiming, “OMG, I CAN TASTE THAT!”
And?
ALWAYS feign an appropriate amount of interest in the blah blah blah of people who are being unusually nice to you because they think that if you’re friends, your husband will fund their ministry ideas.
Now, that’s all just crap I’ve picked up from experience in my first 8 weeks!
Moving forward I could use a chapter on how to dress like I’m poor and I don’t care, how to pretend I’m nice, and how to wear my PW hair. Also, I really don’t like dealing with other people’s goopy miserable kids, so I won’t be volunteering in the nursery – I need to know what the appropriate alternatives are.
Rules. Guidelines. I need some structure, people.
…But, really, who am I kidding?… I’m not about following the rules.  And they knew that when they hired me…. erm… my husband.
….    …..     …..
Anything you’ve learned (from being a Pastor’s wife, or from interacting with Pastor’s wives) that I need to know?
C’mon. Help a sister out!