November 4, 2012 / Jamie Wright / 1 Comment
While I waited for a friend at a coffee shop, I watched a woman in her late forties flirt shamelessly with a young, good-looking firefighter.
He was doctoring his coffee with cream and sugar while she smiled and giggled, and twirled her hair, bending to show him a little bit more of her aged and freckled cleavage. He looked uncomfortable. Hell, I think we all looked uncomfortable – everyone in a fifteen foot radius was squirming in awkward discomfort. 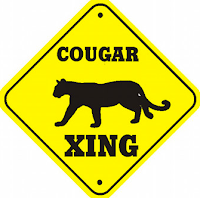 Surely my mouth gaped at the sight of this real live Cougar. I know it’s rude to stare – but really?! I could not avert my eyes. This was just too good, too hilarious, too outrageously stereotypical to ignore. I was taking in the whole scene with inappropriate delight when another firefighter popped his head in the door and told the guy to hurry up. The dude looked relieved and the Cougar looked super bummed; like she was justabout to ask him if she could feel his biceps and then jump his bones on top of his firetruck in a pile of hoses like in that 90’s movie, Back Draft… *shudder*

The object of her peri-menopausal desires made a hasty exit, and then a little girl, just 11 or 12 years old, walked up to the dejected temptress. “MOM! That was SO embarrassing!”
And suddenly it wasn’t really funny anymore.
It was sad.
She looked ashamed. And lonely. And she slowly twisted the gold band around her ring finger until a big, sparkly diamond rounded the corner, no longer hidden against the palm of her hand.
The suburbs are weird like that.
This place is overflowing with people who have full closets, full bank accounts, full bellies… and empty hearts.
I always think it’s interesting when people pat us on the back for being missionaries to Costa Rica. Perhaps they think we were doing something difficult because they don’t know that in Costa Rica there’s a bleeding-Jesus-in-a-crown-of-thorns bumper sticker on every bus, taxi, and pizza delivery scooter. You can easily engage nearly every person you cross paths with in a conversation about God or Jesus or Faith or whatever. It’s really not hard. Every town has grown up around a church, faith is taught in public school, and there’s pretty much a missionary on every corner. In Costa Rica, “Jesus” is generally a familiar and comfortable word – not an instant conversation killer.
We’ve been back in the NorCal suburbs for a whole three months now, and all I can say is that ministry is way harder here than it ever was in Costa Rica. Being an agent for Love and Grace in a place where people truly don’t recognize their own need is really tough. Watching a married woman angle for an affair with a younger, hotter man while her daughter looks on is gut-wrenching. …And sorta hilarious…. But seriously? Gut-wrenching.
I believe Jesus has competition in the American suburbs like no place else on Earth. Everyone here is surrounded by so much shiny new stuff, it’s hard to see the Light.Here, depravity is hidden behind tall double doors, and the things that separate us from God often come gleaming, right out of the box. The contrast between Dark and Light has been cleverly obscured by the polish of materialism and vanity.
Here, poverty is internal, hunger is spiritual, and need feels non-existent. But it’s there.
Behind the facade of perfection in Cougar Town, past the fake boobs and fancy cars and fat paychecks, and at the bottom of aaalll thoooose wine glasses, there’s a need so desperate, a loneliness so great, and a brokenness so crushing that you can practically hear the collective cry for Redemption. But the beautiful thing to be found in all of that mess is that there’s a Savior here, too, and He’s ready to fulfill his promises.
Jesus is here, in Cougar Town.
And for the first time in my life, I feel like maybe I’m supposed to be a missionary…
….    ….    ….
What is the Light competing with in your town?