March 22, 2013 / Jamie Wright / 2 Comments
My youngest son is about to turn 13, so for the next 9 months, until my oldest turns 20 (holy ape balls!), I will be Mom to three teenage boys.
That means our dinner table feels like a locker room… if locker rooms were full of nerds. The conversation tumbles easily from Xbox to music to girls to MineCraft to push ups to girls to movies to farts to money to girls to YouTube, and then back again, in an endless loop, so that over the course of one meal we come around to the subject of “girls” at least 9 times.
At least.
Girl talk inevitably leads to sex talk. And, let me tell you, if there is one thing these guys like to talk about more than girls? It’s sex. So we talk about sex. Kind of alot. And since (as far as I know) none of my children have gone and gotten married, we’re mostly talking about sex of the pre-marital sort; y’know, Virginity and stuff. The Big “V”. The Sacred Gift. The Golden Ticket…. These chats are exactly as awkward as you imagine.
Obviously, my children know that I had sex before marriage because I had a kid before marriage, so there’s really no getting around it. That same kid towers over me now; a full two years older than I was when his own fluttering heartbeat wound itself into mine. These days, I look at him and I think, “He can’t even keep his own room clean – how the hell did I manage an infant and a full time job at that age?!”
So, yeah, I was an unwed teenage mother. Classy, I know.
But oh, it gets worse, because before I invented MTV’s Teen Mom, I was a little bit of a ho-bag. Yup. I willingly did regretful things with my body, and I allowed myself to be used in regretful ways by some regretfully sleazy douchebags, perverts, and (in retrospect) probably pedophiles. Gross, I know.
I believed that sex was the best thing I had to offer the world. It was the only thing about me worth loving. And I learned, too young, that I could leverage sex to get what I wanted. My female parts had become my greatest asset. 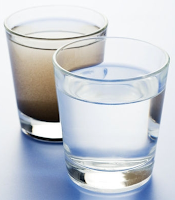 Then I found my way into the Church, 19 with a baby on my hip, and while I lingered on the outskirts of the Christian bubble, guess what I learned… I learned I was right! Apparently, even God was super concerned with my vagina, and where it had been, and what it had touched. Apparently, my genitals were like a portal that led straight to my soul. I had been muddied – and everybody knows that once you muck up clean water, you can’t unmuck it.
It took me a lot of years and a lot of conversations with God (and with people who know more about God than me) to understand that everything I believed about my own sexuality was built on two huge lies.
The first comes from our culture, and it tells us that sex outside of marriage isn’t a big deal.
The second is from the Church, and it tells us that sex outside of marriage is the biggest deal of all the deals ever.
One allowed me to give it away freely, convinced I would carry no burden. The other forced me to carry a spirit crushing load.
Both are complete crap.
Sex matters. It’s the most vulnerable thing you’ll ever do with another human being. Commitment breeds intimacy, and intimacy is what makes sex freaking amazing. I’m not gonna lie, you can have hot sex outside of a committed relationship – but mostly it’s gonna be like… clumsy… and goopy… and ew. The better you know your partner, the better your sex will be. So basically what I’m saying is that wedding night sex is kinda “Meh.”, and five years sex is all “Yes!”, but 18 years sex is like “WOAH!!!” So go ahead and wait. Wait and enjoy the waiting, and then bask in all those learning experiences with your most trusted friend.
But.
If you’ve already gone down that path, you knocked boots, you got ‘er done, you did the nasty…. and now you’re not sure, or maybe you feel dirty and you’re rocking the walk-of-shame-face day in and day out, you need to hear this — I mean it, you really need to hear this…
You’ve had sex outside of marriage? *gasp* So what! You are so much more than your sexuality. And the God of the Universe, the one who turns whores into heroes, and drunks into prophets, and liars and murderers into leaders and kings – that God? He made peace with you and me and our promiscuous, pathetic attempts at love a long, long time ago. He gave you a Redeemer. Shame is no longer your burden.
…
Do I want my boys to wait? Absolutely. And they know it! But I refuse to tie their value as a human being to their junk like a shiny red balloon.
I want them to know that sex is sacred. And I want them to believe that it matters. I hope they will esteem the bodies of the girls in their lives, as they hold their own bodies to the same high standard.
But I also want them to understand that the kind of sexual purity the Bible calls us to doesn’t begin or end with Virginity – It’s way bigger than that. It’s way more significant. And it’s way harder to hold on to.
… ….. ….
To wait, or not to wait? That is the question…