March 25, 2013 / Jamie Wright / 1 Comment
Today’s guest post comes from my long time/real life friend, Jenna Kemp. (I readily admit to playing favorites; Jenna is mine.) I love the way she thinks…
I’ve been in the middle since the day I was born. I was born in middle of the year, in the middle of two days, in the middle of alive and dead, and I later became a middle child. This is actually a funny story. Nobody reallyknows when my true birthday is. It was around midnight, going from June 26th to June 27th, that I exited my mother’s body. And so the story goes that my lungs were not pulling this new outside air correctly (or at all) and everyone understandably got a little worried. So the doctor took me in his arms, laid me on the table and started doing little baby CPR (or whatever it was) on me. There were several moments/minutes/seconds of tension in which my mom was calling out to my dad to see what was happening, my dad was telling my mom everything was fine, my dad would look over the doctor’s shoulder and ask if everything really was fine, the doctor would say it was going to be ok, and the information would bounce back to the original inquirer. This went on for what probably seemed like way too long for all parties involved, especially me who was busy simultaneously being born and dying. But eventually the doc got my tiny newborn body to work and everyone took a moment to breathe a sigh of relief. Once the tension of my seemingly premature and imminent death was released, the doctor looked at his watch and, noting that it was 12:01 am, declared, “Eh, let’s call it the 27th.” And that is the story of my (undefined) birthday.
It’s not just when you or your baby might die that the middle is uncomfortable; the middle generally seems hard for people to tolerate. I think our minds naturally want to take the chaos of the human experience and order it, give it meaning, imbue it with some kind of purpose. Through the ordering of the world we get things like religion, mathematics, gender, the color wheel, and the literary motif of the hero’s journey – to name a few. Some people think that these things are inborn, innate, or “True,” but I tend to think that we don’t actually know, so we pretend like we do in order to be able to wake up, take our kids to school, go to work, brush our teeth, buy groceries, fall asleep, and do it all over again without losing our minds or our will to live. Now I’m not saying that some of these things aren’t important – some of them are very important precisely because they do what they were designed to do: they give us purpose.
What I struggle with is when the categories we create get so firm that we forget to appreciate the middle places. Instead we condemn them because they mix up the things on which we so heavily rely. This is why Galileo was persecuted. He mixed up religious categories. This is why books get banned. They mix up racial and ethical categories. This is why many queer people are injured and killed. They mix up categories of gender and sexuality. The reason I struggle with this firmness of categories is because the beauty of life is in the middle places and in the tension between our categories. Beauty, true beauty, God’s beauty, is in the middle, betwixt, between, underneath, and outside of the boxes we create. We live, whether we want to see it or not, right smack in the middle. Existence is chaos and we are in it! What I absolutely love, more than most things, is when the categories we make recognize and celebrate the middle spaces as spaces where we meet something both fully transcendent and completely imminent. The Jewish celebration of Pesach embraces the middle as the place where we meet God.
Pesach is the celebration of the Passover and the Exodus from Egypt. Pesach not only recognizes, but it commemorates and celebrates the middle. The story takes a leader who is in the middle – Moses, who is both a biological child of Hebrew slaves and child adopted into the royal Egyptian court – and follows him as he leads the Hebrew people out of slavery and straight into the middle of the desert. As his people remind us over and over throughout the books of the Pentateuch, they were fine in Egypt. Sure they were doing forced labor, but their lives were predictable and they got enough food and at least they had a place to lay their heads at night! But Pesach says, “You were living in an oppressive place and now you are free to experience the unpredictability of the middle!” Hooray? 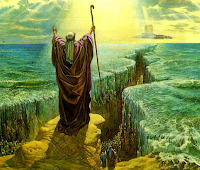 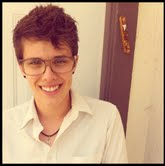 Jenna Kemp is currently working on her MA in biblical studies at the Graduate Theological Union in Berkeley, California. She focuses on literary readings of narrative in Hebrew Bible and for her thesis is working on the Jacob cycle in Genesis. While she grew up in the Evangelical world of Christianity, she is currently studying to convert to Judaism (a one year process) at a local synagogue. She lives in Oakland with her partner Malka and their dog Leviathan. All of them love Jamie the VWM.
*Jamie loves them, too.

Are you celebrating the middle places?