July 22, 2013 / Jamie Wright / No Comments
I spent the first two weeks of July in South East Asia, getting a first hand look at the sex trade, slavery, and human trafficking that plagues that part of the world. After I got back, I had coffee with a friend who said, “Dump it all out.” So I did. Every detail, every feeling, every last stinkin’ bit. I told her everything I saw and everything I did, and everything I thought, taking no care to filter, sift, or soften any part of it. Just kept blurting stuff out, like horrible stuff, while I sipped an iced latte.
A little bit after we went our separate ways, she sent me a text.
“I got in the car and wept.”
I felt kinda bad because I knew I’d burdened my friend with a heavy load. But there was something else, something kind of good about knowing she’d been upset, unsettled, disturbed – it meant I’d done something right; I’d told the story well enough that it got ahold of her and shook her spirit. I shared the experience, and it was… disruptive.
Figuring out how to tell the story here, in blog world, has been more challenging for me. There’s so much to tell, I don’t even know where to start…
Should I begin when she was 7 and her virginity was sold to a foreigner? Or when she was 12, and a family member traded her to a pimp for a small sum and the promise of more cash to come from her “work”?
Maybe I should start when she’s 16, swaying back and forth on the balls of her feet in towering heels and not much else, up lit by stage lights to make her more visible to potential clients. She’s #133 if anyone’s interested.
Or should I begin at the beginning of the end? When she’s 21, used up and aged out of the “nice”, upscale clubs that line the streets with neon lights and pumping music, cast off to the dark, back alley brothels where the kinky crap happens; where johns are allowed to spank, or bite. Or worse.
There are too many stories to tell, and last week I shared space with every one of them. I breathed their air, ate their food, slid into a vinyl booth in a bar and set my beer at their feet. These stories danced naked on my table. They became flesh and took on life, and my mind kept reaching for a new word to describe them and finally it settled on… real.
These are real people, bonded to real criminals, sold for real sex.
And that is a real problem.
I mean, I knew it was real before I got there, but still… It became alive and it was right in front of my face. I will be forever disrupted because of it.
It’s real and it’s huge. The scope of the problem is astounding. The sheer numbers of people for sale is shocking – and I’m not talking about reading statistics on the internet, I’m talking about what I saw, like, with my eyeballs – one hotel with 300 girls for sale, another with 500, and then another and another, karaoke bars with a hundred girls each, street after street of brothels and fronts for brothels. A 20 minute drive through a single town left me stunned by the magnitude of the sex trade in SE Asia. And then there were the infinite layers of contributing factors; poverty, porn, corruption, war, greed, culture, fear, pride… It was unbelievable. And it was very real.
I mean, it is real.
I sat in a car on a street corner watching teenage girls turn tricks…
I sat at a conference table flipping through the case loads of prolific pedophiles…
I sat in an office listening to stories of terrible abuse…
I sat in a hotel room overlooking the city, wondering if I have a place in this mess…
It seemed never ending. It seemed impossibly hopeless. It seemed unfixable.
But it’s not.
Because there’s another part of the story.
There’s the part where real peoplefight to rescue, restore, and redeem the victims of trafficking and slavery. It’s the part where men and women pour into the lives of boys and girls who have suffered abuse beyond belief. It’s the part where people risk their own bodies to rescue the bodies of others. It’s the part where people make personal sacrifices to give life to a movement. It’s the part where hearts are moved and communities are challenged to take a stand for their children.
This is the part where shit gets real. 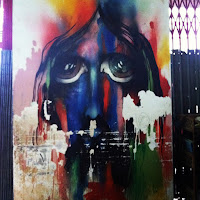 There is a thread of Redemption weaving its way through the broken streets of south east Asia, I’ve seen it with my own eyes. In 12 days and 2 countries, I saw light overtaking the darkness. I saw the smiling faces and heard the happy giggles of children in an aftercare facility. I saw a church where ex-pimps and ex-prostitutes sang of Grace and Love, together. I saw families, restored and reunited after poverty pushed them to do the unthinkable. I saw a beat down and bloodied prodigal, returned unexpectedly, to the arms of the ones who loved her.
I saw how Hope can thrive in brothels and bars and after years of abuse.
And I saw how we, you and me and this ragamuffin community, can help. A lot. Like, for real.
Fair warning? I’m going to ask you for something. And I’m going to do it on Thursday. And I’m filled with hope and excitement and readiness to roll this plan out to you. And I seriously cannot wait.
This is the part where a blogger can make a difference. And so can you.
I hope you’ll come back and hear how…   (click here for the follow up post)
….        ….        ….
Ever wonder how you can help end slavery and trafficking?