September 12, 2013 / Jamie Wright / No Comments
When I was in grade school, we had a science fair every year and I did the same science project, like, 3 years in a row.
I sprouted beans.
Talk about exciting! I put the seeds in 2 styrofoam cups with dirt and water and then I put one cup on a window sill and the other in a cupboard. My hypothesis was always the same: the seedlings in the dark cupboard wouldn’t grow as well as those in the window. And I was always right, year after year. Because duh.
I thought about my little bean sprouts when we met Maria*.
We walked around to the back of Maria’s little house and climbed down some overly tall (think treacherous, deadly, cliff-like) steps, to a small plot of land with a good sized hen-house and a small shed. Maria wanted us to see her seedlings.

World Vision has provided Maria and her family with a small hydroponic garden where she and her 2 young daughters are growing their own fresh vegetables. Her seedlings have sprouted into the beginnings of broccoli, radishes, tomatoes, and other healthy goodies that lots of kids hate. Buckets collect the nutrient rich drain off, and Maria has expertly culled and spaced the new plants for optimum growth. She held a little disposable cup out for me to look in, then she smiled, and said, “Maracuya!” and I knew from my kickass spanish that the itty bitty leaves twirling out of the soil would be passion fruit someday.
Of all the things I’ve learned about World Vision over the last few days, I am most impressed with their Guide Mothers program.
When World Vision begins work in a community, one of the first things they do is look for the women who are doing it right. Crazy, huh! They actually begin by identifying the mothers of healthy, well-nourished children and asking them how they do it. What do they feed their kids? What do they give them to drink? How do they keep their clothes and homes and bodies reasonably clean? World Vision then empowers these hard-working, sensible Moms (through training and regular home visits) to impart all that wisdom and experience to other women in their vicinity. They become Guide Mothers; Mothers teaching Mothers how to Mother.
SoMaria’s pretty little garden is actually a product of Marta’sguidance. BOOM. 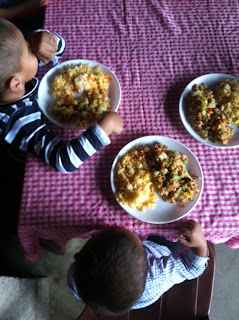 It was sweet Guide Mother Martawho encouraged Maria to incorporate more fruits and veggies into her daughter’s diet. We met them both, along with a few other mamas under Marta’s care, as they prepared and served a balanced meal of rice, vegetables, and soy protein, together. It was an awesome thing to see.
Essentially, World Vision is cultivating health and well-being by giving the right women the tools they need to lead. Seedlings don’t flourish in the dark… and, it turns out, neither do children.
Malnutrition and lack of hygiene are a deadly combination. A child simply cannot grow to their full potential under such conditions. But World Vision’s Guide Mothers are a ray of sunshine, bringing life to the families in their communities.
Honestly, if I could sponsor a Guide Mother, I would. I think their part in the development of healthy communities is that important.
My hypothesis is that women who are given the guidance and tools they need to raise flourishing children will do just that, while the kids of those left in the dark will wither.
Because duh.
It’s totally scientific.
*Her real name. But maybe not. I can’t remember. We’ve heard so many names this week. …But I’m pretty sure hers was Maria. Or not. Monica? Melani?… Crap.
……         …..         ……
Can I just say? THANK YOU, to those of you who are following along. You have no idea how encouraging it is.