January 22, 2014 / Jamie Wright / No Comments
Remember when the internet was fun? Me, too.
I can remember a time when the internet was kind of like a reflection of real life, but bigger, where people would “meet” (they would stumble upon each other, or run into each other, or a friend would introduce them) and a relationship might begin to form – or it might not – just like in real life. The people who connected naturally would stick together, form bonds, maybe even become (dare I say it?!)…friends.
Remember?
That was back when we were still figuring out how far we could push the boundaries of cyber-relationship. We were learning how to be who we are, and say what we mean, and sound like we sound. We were finding our voice.
And, oh, how we have discovered it.
What we quickly learned is that a keyboard and computer screen make us brave, maybe braver than we’ve ever been. And we learned we could say anything – literally anything.
And that changed everything.
That is exactly when The World Wide Web stopped feeling like a huge family room and started feeling like a little court room. Every post is a trial. Every word will be argued, debated, juried and judged. Every photo will be inspected thoroughly for signs of… anything that anyone can find wrong. Every flaw will be pointed out, every comparison will be made, every right will be invoked, every meme will be created, every unicorn will be interrogated. There is no end to it; this great, big, stupid argument we call the internet.
Say anything. Hear nothing. This is the New World Order.
I’ve been thinking about this a lot lately, as opening my laptop has become less and less appealing.
It seems like there used to be a space, in between the crazy, where stories were shared and communities formed. It was a wide lane of reasonable people having interesting conversations and trading ideas, challenging each other, and loving one another, the way real life friends do – without a finger hovering over the “block” button. It was less ragey, less ranty, there were fewer whacky e-vangelists demanding we REPENT and TURN to their personal brand of living/speaking/breathing. But that relatively healthy space has grown narrow. Considerate discussions have been drowned out by ALL CAPS opinions. Postulation and circular reasoning now stand in the way of thoughtful dialog and forward momentum. In short, this just isn’t good anymore.
It’s not fun.
It’s like, somewhere along the line, we decided that our opinions were more important than the things that brought us to them. In truth, I don’t care about your opinion. For real. I do not care.
But, your story? Yes, please. Your story sways me, moves me. Your story changes me.
The beauty of the internet is not conversation, it’s connection.
Say anything. Yes. …But say it to my face.
I don’t say things online that I wouldn’t say to your face. I believe that’s why it works.
What you read here is who I am, true, but this is not me “being brave”. I get brave with my friends, late at night, curled up on the couch with both hands around a coffee mug. That’s when I tell my secrets and say things I would never say out loud to anyone else. That’s when I say anything. 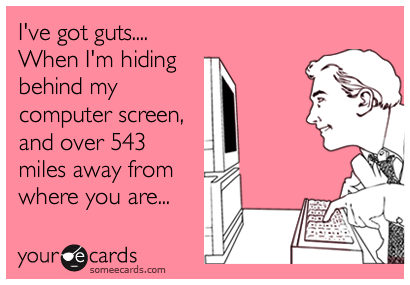 But here, we’ve lost our social graces. There are no facial cues to tell us how we’re being perceived, and so it’s easy to believe that our conversation is more important than our connection, it’s easy to betray friendship and kindness in favor of making a point. This is why all of the reasonable people are talking of jumping ship, like it’s time to quit the internet.
Soon, this once sacred space will be a wasteland of assholes fighting for their opinions from behind computer screens that keep them safely hidden from the world. Anonymous.
Go ahead. Say anything.
But know this; A computer screen may make you brave, but it does not make you smart. And a keyboard may make you free, but it does not make you right.
I want my communities to be family rooms, not court rooms. I want the people I cross paths with on the internet to feel like they’re in my home, where they can say anything to me. There’s plenty of space here for differences and disagreements, but I will not save room at the table for aggression or harassment. I won’t converse with people who don’t respect or understand appropriate boundaries. I won’t respond to condescension. And I will never ever acknowledge Anonymous.
Say anything. But say it to my face.That’s my new rule.
If you wouldn’t say it to my face, then don’t say it. Go find somewhere else to pretend to be brave. If you just want to argue, you’re in luck, this here internet is full of impassioned a-holes just itching for a fight. I am not interested.
I want you to tell me your stories. And I want to tell you mine.
Let’s do more of that, shall we?
Ready… Set… Say anything.