Please, Lord, let him be funny.

March 3, 2014 / Jamie Wright / No Comments
I dropped my iPhone in the toilet and it did not like that.
I mean, it was a clean toilet, as far as toilets go – it’s not like I dropped my phone in an actual turd or something – but still, my phone gave me the finger. It quit. Just turned its back on me in my hour of need. Or, more specifically, my hour of Oh-crap-I’m-driving-to-LA-tomorrow-and-I-need-a-flippin-phone! (But not a flip phone, because lame.)
So here’s what happened.
I switched my number to some borrowed, old, cheap, dumb android that I haaaated from the moment it came to life and laid its creepy red eyeball on me and shouted “DROID!” I seriously could not get along with that phone, so I used the Force to trick my 16 year old into switching phones with me. “This is the droid you’re looking for.”, I said, and he was all, “That’s the droid I’m looking for.”
Done and done.
We switched and then, when I got back from LA, we switched back (because we love our lives to be as messy and complicated and nonsensical as possible). I walked out of Verizon with my new (old/used) iPhone and handed my son’s phone back to him, thanking him profusely for letting me borrow it. And here’s where I made the third biggest mistake of my life – I didn’t even think about wiping my data off his phone. Yeah. You heard me. I accidentally gave my 16 year old boy an open door to all my stuff... my pictures, my email, my Facebook… all of it.
We went home and I took my sweet stupid time to sync the new phone and we left for church before it was done. So that kid had an all access pass to every corner of my internet world and several hours to mess around with it before I’d even know what was going on.
That’s how the hostile takeover happened. 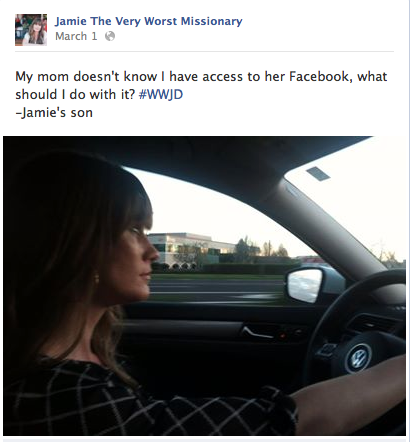 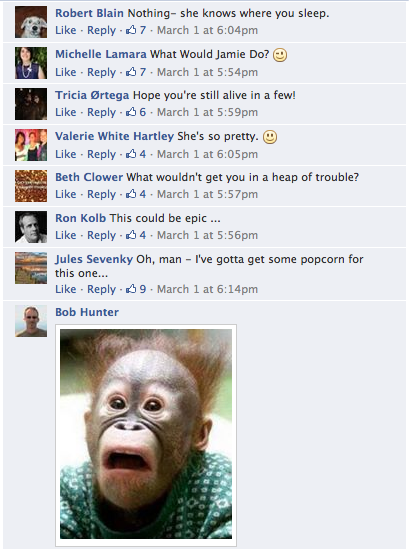 … he posted the one thing he knows I hate the most. A teenage bathroom selfie. Yeesh. 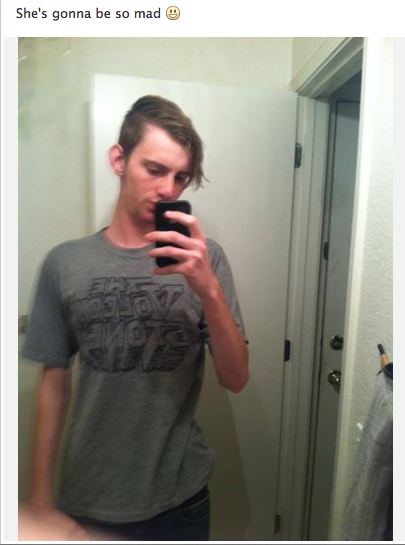 Then the meme’s started… 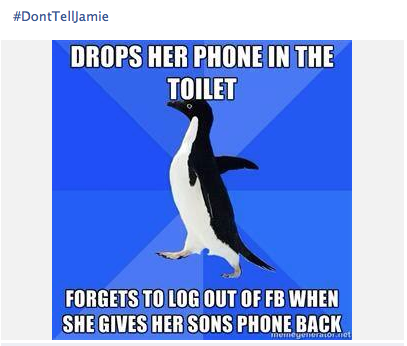 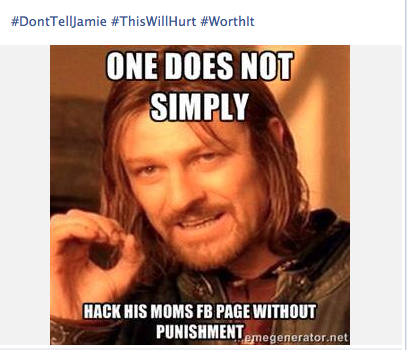 Drunk on power, emboldened by a steady stream of likes, he got brave. Like, real brave.

*ahem* That is a lie from the devil and I will dispute that statement until my last day on Earth. Thankyouverymuch.

Then there was this. 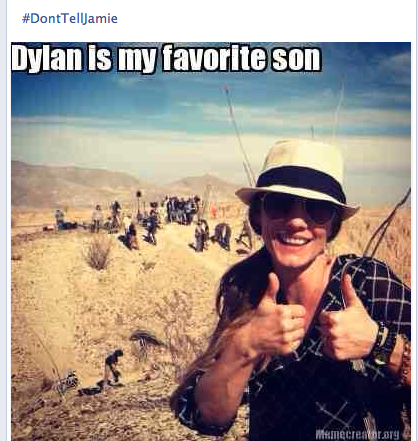 And before the night was over, he had snapped a picture of me unhinging my jaw like a boa constrictor and terrorizing a green salad. I will never eat in public again. Ever. I had no idea. 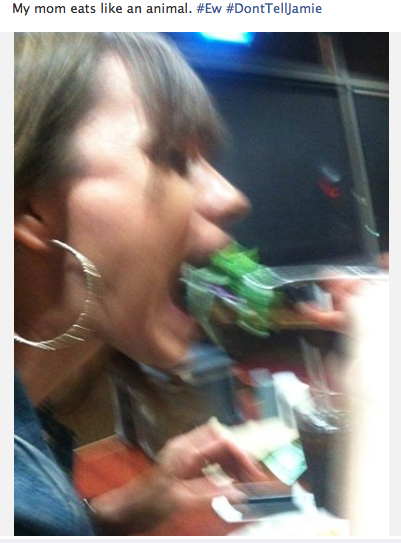 Then the kid took a bow and departed like a true pro. 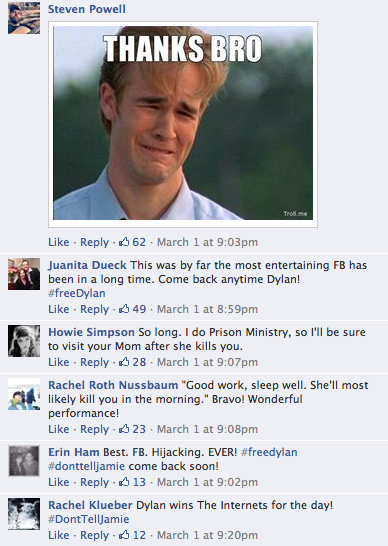 The people of the World Wide Web feared for Dylan’s future. #FreeDylan. But when I found out about his tomfoolery, I was like a picture of grace and love and forgiveness…

It was payback time. Putting a horse head in his bed seemed a tad extreme, so I went with posting a half naked baby pic. 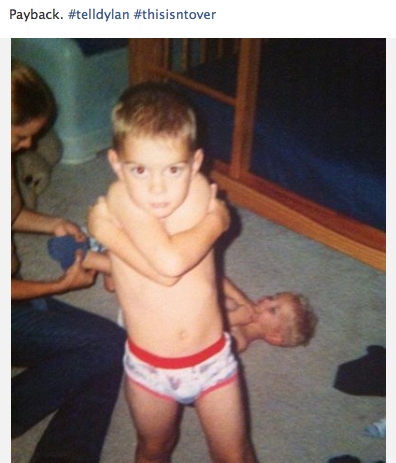 When that wasn’t satisfying, like, at all, I did this. Because I’m mean. 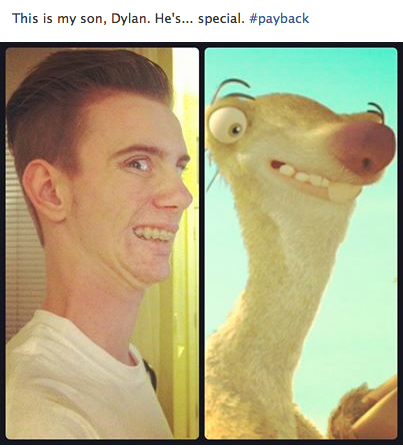 This is exactly when the internet turned its collective back on Dylan, and “liked” that amazing pic over 2,500 times in about 5 minutes. (It’s a cruel digital world, son. Time you knew.)

Of course it wasn’t over. … Honestly? It might never be over. 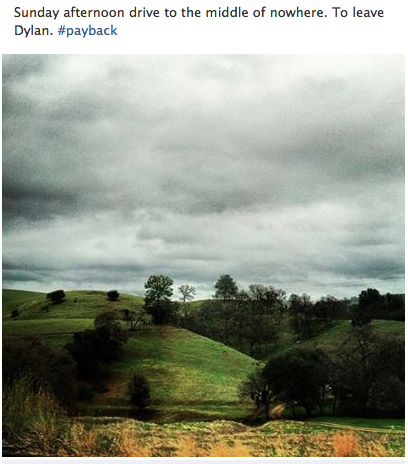 Dylan may pay for his transgressions for the rest of his natural life. But I think he’d say it was #WorthIt.
Maybe. 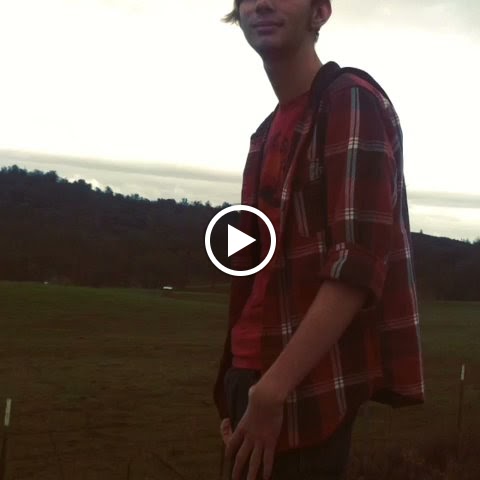 Maybe not.
The truth is, I’m sort of exploding with pride right about now. I mean, he could have done and/or said anything, ANYTHING, but he was cool and appropriate and at least he wore a shirt in that dumb selfie. But, more importantly, he was funny.
I LOVE that he was funny. It’s like the answer to a prayer I’ve long said for each of my boys, holding them in my arms as warm, squishy babies, knowing their futures would be bright and beautiful, but also hard, because life just is. ...Let them smile. Let them find humor. Please, Lord, let them be funny. Amen.
My boy knows from whence his funny comes.

Dylan wrote that. And he’s totally right. #HisMomWins. #TrainUpAChild
***No Dylans were harmed in the making of these shenanigans. Relax.***