April 17, 2014 / Jamie Wright / No Comments
The first time I wrote about human-trafficking, someone told me he would never read my blog again.
He didn’t think I’d done a good job telling the whole story, and, to be fair, he was kind of right. I wrote truthfully about little girls in aftercare facilities and young women dancing on my table, but only vaguely alluded to the war, greed, and politics that propel the victimization and impoverishment of many in South East Asia. I avoided those complexities in favor of telling the stories I felt like I’d had a small part in. I shared my tiny, two week glimpse into the world of trafficking and slavery from the only perspective I knew, and then, for a month after my trip, I labored over finding the right words, agonizing over every sentence and syllable, aching to tell the story well.
But still, he was right.
I failed to explore the intricate layers of cause and effect which come together to create and sustain the mistreatment of our fellow man. And honestly? Maybe I did that on purpose. Because I do not know what I’m talking about. I’m not educated, equipped, or experienced enough to have an intelligent discussion about the political violence, cultural oppression, subjugation of women, overt xenophobia, and abject poverty that collectively form an environment where a child can be bought and sold like a fish at market, a man can be consigned to a brick factory for the rest of his life, a woman can be purchased for sex against her will, and a government will do nothing to stop it.
I seriously don’t know anything about any of that stuff.
You know what I know? I know how to tell stories in 700 words. That’s what I know. They are true stories, to be sure, but they’re usually touchy-feely, soul-squishy, heart-stringy stories. Basically, I have no idea how to talk about tough stuff like politics and corruption and war. That junk is scary and serious, and I didn’t even take an Econ class in high school. ….So, like, what am I gonna say?
I don’t know.
The truth is, when I wrote about my first trip to SE Asia and my first encounters with trafficking and the plight of underage sex workers, there are parts that I left out. In retrospect, it may have been to the detriment of the whole story. Maybe there are parts I should have told because, even in the context of my limited personal experience, they could have shed light on the bigger picture…
Like. Maybe I should have told you how, before I ever stepped foot in a brothel, I walked the blood soaked Earth of the Cambodian killing fields. 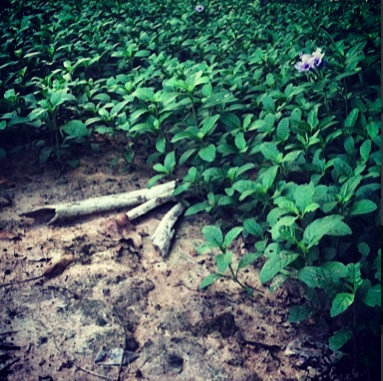 I stood where the bones of the dead are slowly making their way back into the sun and air. They rise from the ground to return to dust under the feet of gawking tourists, like me, and blow away on the whispered prayers of the Faithful who have come to pay their respects. There is a dirt path, dotted with dry bones and scraps of clothing, uncovered by the elements. Too many bones to unbury, this is what’s left of the educated, the urban, and the intellectuals. I stepped on their remnants, the ribs and femurs of thinkers, innovators, engineers, and philosophers, the men and women who threatened the dream of a tyrant. And now they are all gone. I took off my shoes and passed through wisps of burning incense to stand beneath a tower of skulls. A gilded, five story shrine. An inventory of the dead. It is a place to stand face to face with the empty, un-accusing eye sockets of eight thousand people, just a small portion of the millions who were brutally murdered by Pol Pot’s regime, less than 40 years ago.
…Less than 40 years ago.
Staring into a pit where the babies were tossed, I realized I was born the year the Khmer Rouge began its mass extermination – those babies would be my age if they had been allowed to live. I thought about my earliest memory, from when I was barely three and my big brother flicked a bee at me and it stung me right in the belly button. If I had been born in Cambodia, and if I had been lucky enough to survive the Khmer Rouge, my earliest memories would be of… genocide. 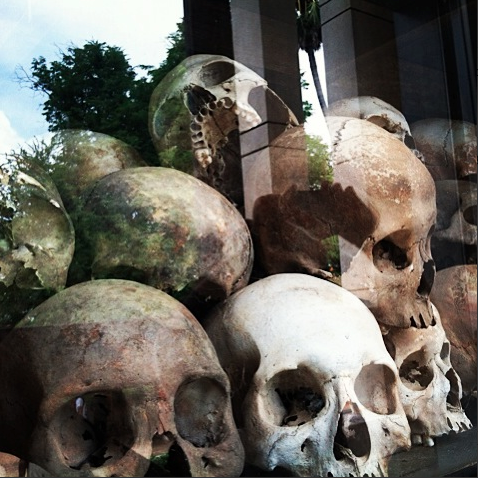 I stayed there for a while, sweating and crying in the middle of the killing fields, wondering what kind of person I would be if my first memories were of death. What kind of parent would I have become? What kind of citizen would I be if I’d seen a government murder my family? Would I value human life more or less, if the ground I walked every day was littered with the bones of my neighbors? What would my country look like if all of the educated were eradicated a mere 40 years ago? And what would I be willing to do to survive?
I’m not pretending to have answers to those questions (Because, really? I can’t even imagine. My early childhood trauma was a bee sting on my belly button, so I think it’s safe to say that I have no idea what I’m even talking about right now.), but they do help paint a stunning picture of what could happen in the aftermath of desolation and destruction – not just the destruction of life, but of culture and history and family. The fallout would know no borders.
So, yeah, that guy was right.
Human-trafficking and slavery are symptoms of a much, much bigger disease, and those of us who feel compelled to seek Justice for the modern day slave must at least tryto understand the intricate dance between history and religion, wealth and poverty, warmongers and politicians. We’ll have to get uncomfortably familiar with the intersection of cheap Eastern labor and the relentless Western demand for even cheaper goods. And then there’s the nuanced difference between the exploited and the truly enslaved, and the confusing circle of abuse that continues when the trafficked becomes the trafficker, which is often the case.
Gah! It’s so complicated, it makes my brain want to shrivel up and die.
I guess I’ve been thinking about this a lot, lately, because I’m headed back to South East Asia (though, not Cambodia). 8 weeks from today, I will board a plane for a miserably long flight to visit my favorite badass mofo undercover investigators from The Exodus Road.
And this time I’m taking friends!
No, seriously. I actually convinced three whole people to go visit South East Asian strip clubs with me. …I am not even kidding. I think I have magic… Anyway. On June 16th, I’m taking my sarcasm twin, Kristen Howerton (Rage Against the Minivan), my favorite Guatemalan-rave-twerker, Roo Ciambriello (Semiproper),http://semiproper.com/ and the one and only Heather Armstrong (Ok, fine. There are probably other Heather Armstrongs – but Dooce, you guys. DOOCE.) to the other side of the world for an unforgettable tour of bars, brothels, and pedophile hot spots. For. Real.
It’s gonna be like the most awesome week long squeally girls getaway ever! (Except, like, the exact opposite. Because slavery, butt-sweat, warm light beer, and trolling for underage prostitutes in a blacked out rental car are not my idea of an awesome girls getaway. I dunno, maybe that’s just me.)
Not gonna lie. I’m pretty freaked about trying to write about this stuff again. It is impossible to tell the whole story of human-trafficking and the SE Asian sex-trade in 700 words. Impossible. But I am going to try to, at least, tell a wholer story, a story that acknowledges the depth and complexity of the issues at hand. I’m excited to show you the steps The Exodus Road is taking in response to the big picture of child slavery. I want to tell you about how these cycles of abuse and enslavement are being broken. I want you to hear that corrupt governments can clean themselves up, educating villages can prevent at-risk children from falling victim to traffickers, and prosecution of perpetrators is a viable deterrent to would-be abusers.

That guy really was right, the whole story matters. There is far more to it than the “sensational” stories of little girls scooped out of brothels to be nurtured and cared for, healed of deep emotional wounds, and, if at all possible, reunited with their parents. And, yes, it goes way beyond the flashy red light districts we’ve come to expect when we pull up sex-trafficking documentaries on Netflix.

The story of one arrest, the story of one rescue – they do lose some of their significance when you can’t see the great odds that must be overcome to get there. The story of one national worker who chooses a low paying job on an anti-trafficking task force over a big paycheck upon college graduation – because he believes in the value of a human life – is far more impressive in the context of the whole big mess. But there is still a place for their 700 word stories. We get to mourn individual losses and celebrate small victories, and fall in love with the people they belong to.
We get to say what we know, even if all we know is what we learned when our bare feet brushed the bleached bones of the dead; Every story matters. 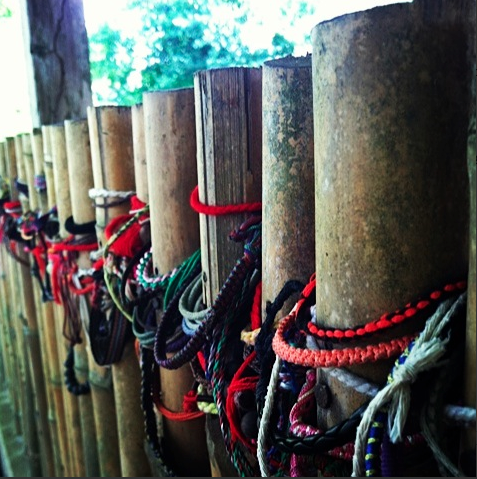