June 26, 2014 / Jamie Wright / No Comments
Remember that one time in Guatemala when I posted a riveting photo essay from pics off my phone?
Well, I decided to do it again. Because everyone knows that a picture can be a powerful thing. That’s why National Geographic is so popular, and also hella pricey. It’s like the complete opposite of Playboy —“I only read it for the pictures.” Know what I mean? *wink wink*
Anyway. The truth is, I’ve spent this week writing real words about important things that matter, sorting it all out in my head, fact checking, getting certain names and places right and purposefully obscuring others, carefully filtering the details in order to share what’s relevant without being unnecessarily sensational, deciding on which pics are most appropriate and useful to the story.
There’s so much I want to say about my trip with The Exodus Road, and I want to get it right. I want to tell you about the things we witnessed, the people we met, the good work we saw first hand, the thoughtful, longterm approach of the men and women on the ground in the fight against human trafficking. And, especially, I want to invite you to partner with this work in a significant way. I promise, all of that is coming! But, as you can imagine, it’s not easy stuff to write about and I am a slow processor and a slow writer. Basically? I’m just slow. It will take me a little while to have something put together that I think is worth posting here.
So, right now I’m taking a break from writing real words for a second to partake in one of the most powerful forms of media we have at our fingertips today; The iPhone photo dump. They used to say ‘a picture is worth a thousand words’, now they say ‘pics or it didn’t happen’. Both of those statements are really unfortunate for people like me, who’s pictures only say a few words, like, “I can’t tell what this is.”, or “Why am I looking at this?”, or simply, “Huh?”
Prepare to have your mind blown by my keen eye and skilled thumb. I give you…

A JOURNEY TO THE CENTER OF THE
SOUTHEAST ASIAN SEX TRADE (but not really);
A PHOTO ESSAY (but actually just an iPhone dump)

…………………………………………………..
Our journey begins with…. Well? A slice of pizza.
This was the first pic in my phone. I’m not entirely sure why. It’s probably because I have a real legitimate asthma inducing fear of flying and every time I board a plane I am 100% sure I’m walking down a narrow aisle to the seat of my death and pizza is my favorite food and I ate it right before I left, so I probably snapped this pic so I could die with my great love in hand. Why this is not a picture of my favorite husband and perfect children, I cannot explain. …But, mmm, I do love me some pizza. 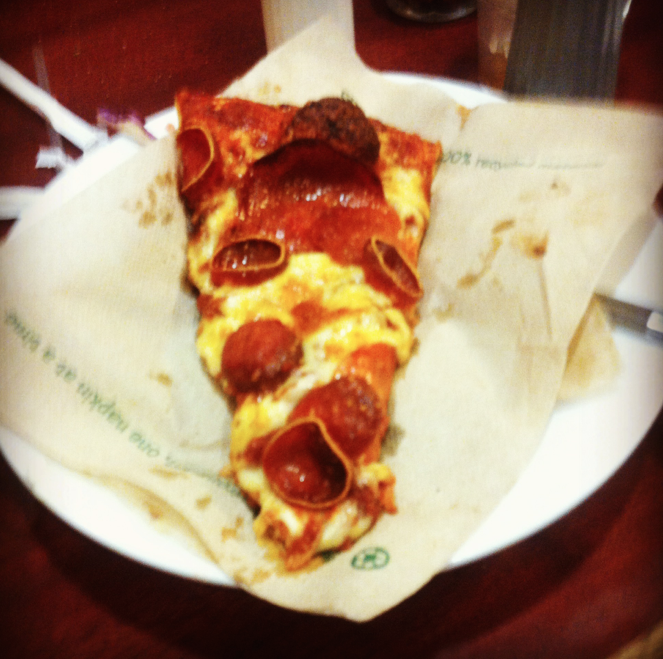 Next up? Apparently, the first thing I wanted to remember from the country I lived to land in is an unreadable snapshot of a McDonald’s menu taken from a bad angle. I’m beginning to sense a theme, but what can I say? I’m a real foodie. 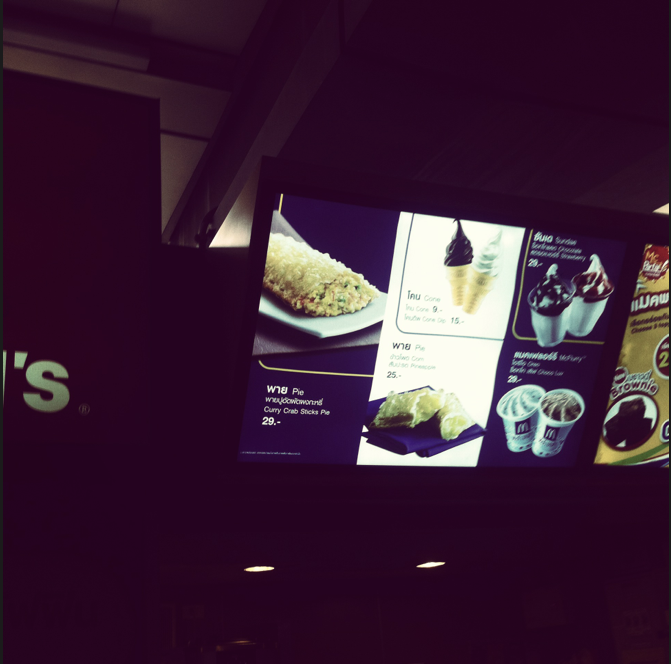 Ok. Obviously nobody really cares that Mcdonald’s has A CURRY CRAB STICKS PIE YOU GUYS !!!!! on their menu, so I turned my attention to taking pictures of more important things.
Like arms and legs.
But seriously, look, there’s a tuk tuk, right there! Can you see it? It’s kind of far off in the background. Do you see it?!?! No??? No?! You have to look PAST the arms and legs… Y’now what? Just forget it.
There were things to document at every turn; beautiful architecture, smiling faces, entire families on a single scooter, shacks in front of skyscrapers, small children running, playing, having all manner of fun, bustling streets, thriving businesses, restaurants, strip malls, engrish. And there were other things, too. Darker things. Massive red-light districts with miles of glowing neon, prostitutes holding their babies on the street while they called out to potential clients, women from all over the world – stately Russians, gorgeous Ukrainians, elegant Ugandans, delicate Cambodians – all for sale, and men of every country, creed, and color who arrived in droves to buy them.
It was like a photographer’s dream come true.
Alas, I am not a photographer. But I did get this pic of the city…
…and this pic of the country…
…and this impressive shot of the ground with some white people’s feet…
…and the blurry inside of a parking garage. Wouldn’t want to forget that now, would we. 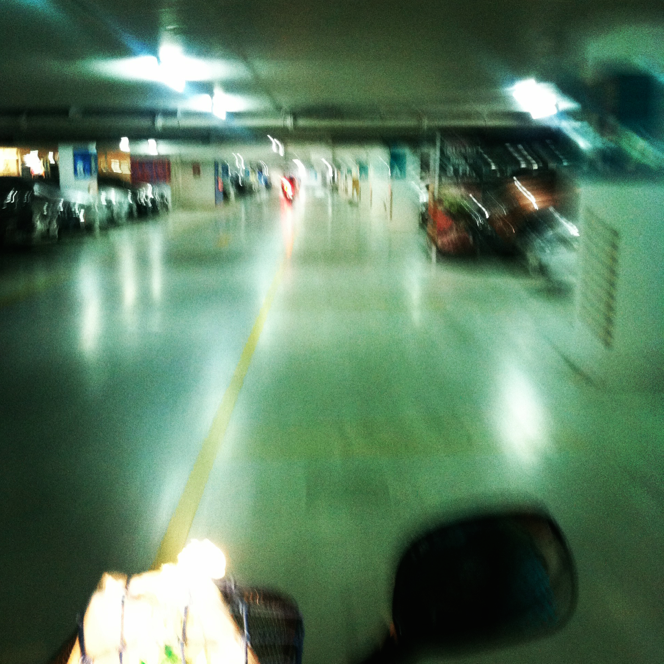 As you can see, I thoroughly enjoyed taking in the many sights SE Asia has to offer, but my primary objective on this trip was not tourism. I went to do a job. I went to learn. I went to witness, observe, and document the many ways the Exodus Road is working in partnership with other organizations and government agencies to end slavery and trafficking for good. That included an introduction to the world of undercover investigations.
In order for this to happen, we were briefed and debriefed and rebriefed and then we were briefed one more time about what we could say and which pictures of their work are and are not acceptable to share publicly. This was a constant dialog in our group and we chose to err on the side of caution and safety for the people who are risking life and limb for this cause.
I did, however, manage to sneak a sweet shot of a nighttime investigation so you’d have an idea of what we were up to, then I added a filter to really help the detail pop. You’re welcome. 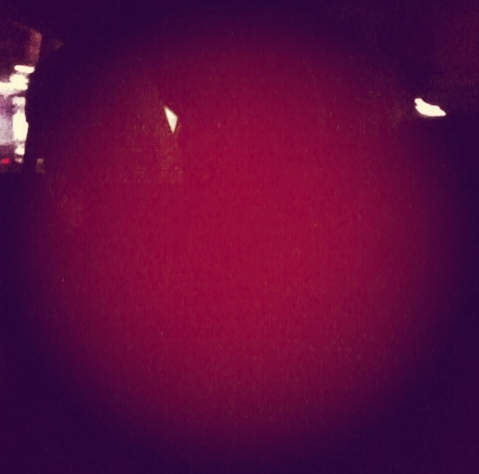 I also caught this bit of excitement from one of our nights out.
I know! I can’t believe it either, but it really happened! 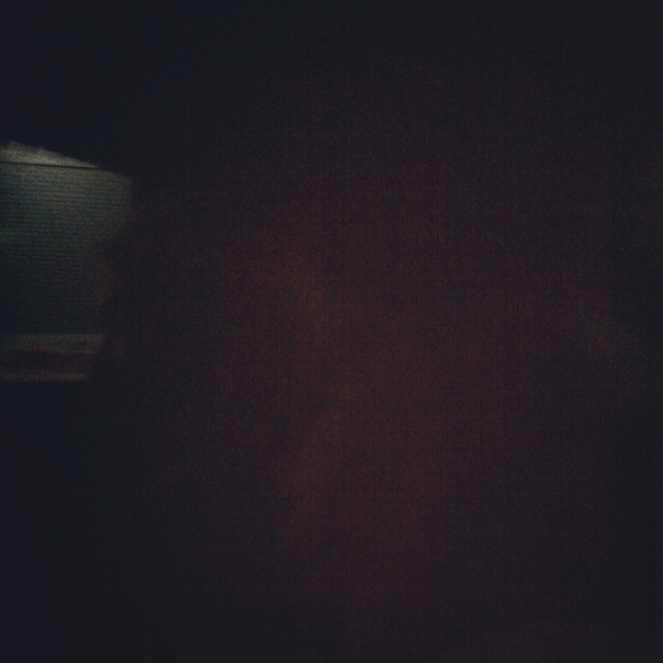 This is just an awesome pic of Roo Ciambriello in the rear view mirror. *ahem* Don’t mind what’s happening elsewhere, just look at Roo in the mirror. *cough cough*
I can’t remember, but I think this is some top secret shit that I didn’t want to forget, so I snapped a pic to refer to it later. It’s a good thing, too.
In addition to the rescue side of things, we were invited to a couple of aftercare facilities to get an idea of what life looks like for girls and boys after they’ve been freed or escaped from an abusive environment.
We toured the Anti Human Trafficking and Child Welfare Center for abused, exploited, and trafficked children. This is a pic of the other bloggers talking with the amazing guy who runs the place. Obviously. As you can clearly see here, they were enthralled by the stories of redemption and restoration he told us. He is honestly one of the most inspiring people I’ve ever met! 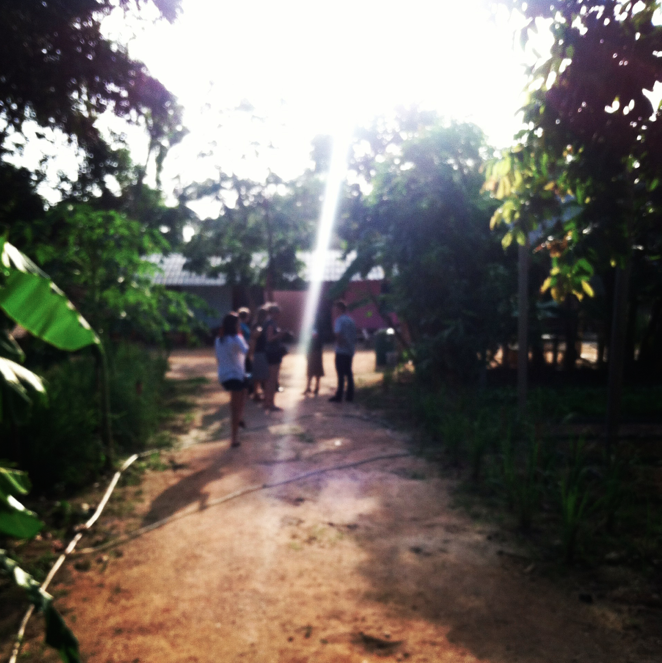 At this home, the children participate in skill building activities like mushroom farming. Seriously, those are mushrooms. I mean, they grow other stuff, too. But MUSHROOMS YOU GUYS!!!
Plus, they grow their own protein!
I took a pic of this single egg because I was gonna say something deep and meaningful on Instagram about how one egg can mean the difference between life and death for these children. But then I remembered I’m not Sally Struthers. 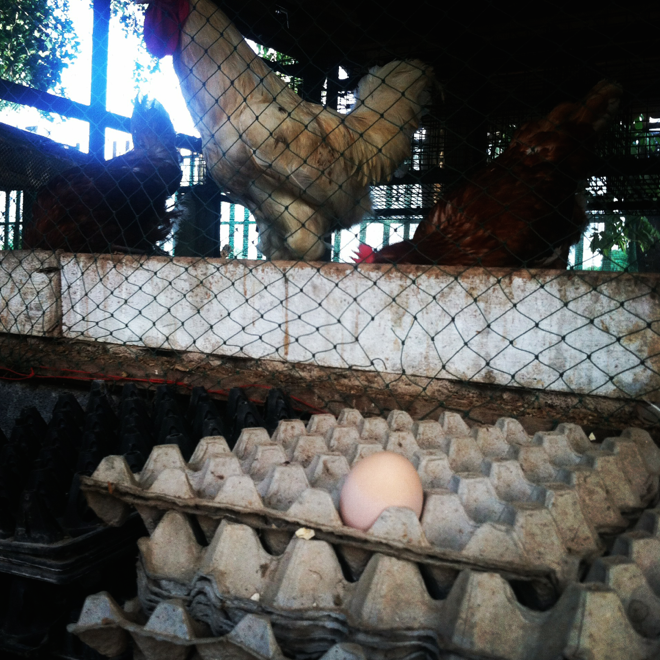 #Chickenstagram
I really wanted a good picture of Khru Ja to share on my blog! This one didn’t turn out,
so I decided to take another… 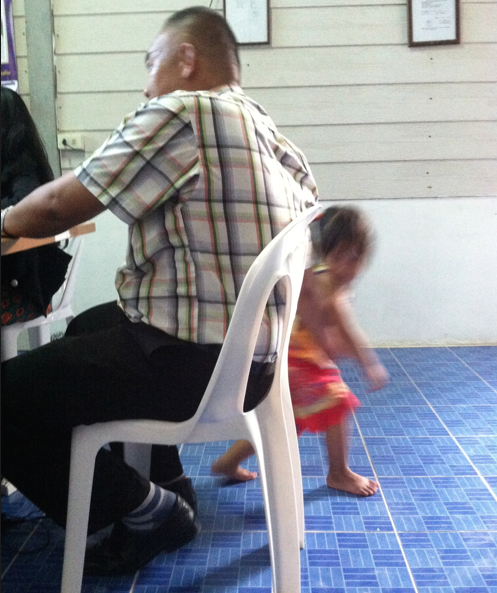 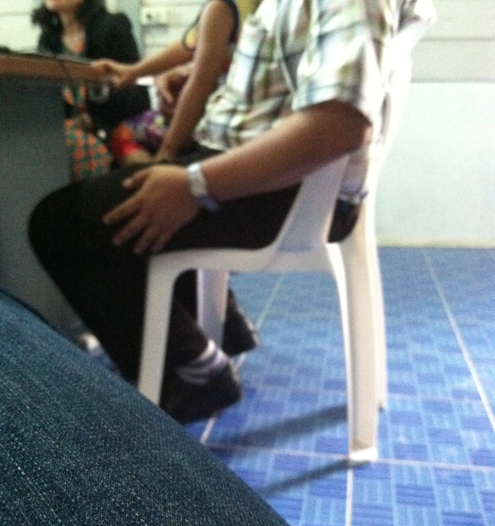 😐
Naturally, we didn’t spend every second of every day working. We had a cultural excursion one morning and went to see an incredible, old, intricate Buddhist temple. So glad I got this crooked, out of focus, poorly framed shot for posterity. 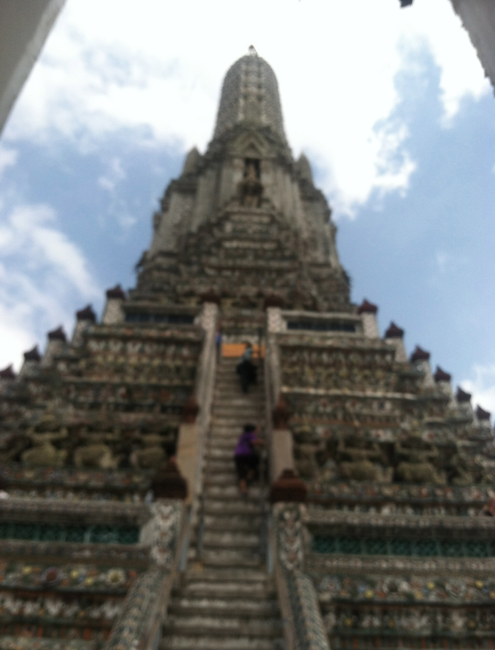 And, one day, en route from one location to another, I looked out the car window and THERE WAS A BABY ELEPHANT WALKING DOWN THE STREET!!!!
Before the trip, our hosts graciously asked us if there was anything special we’d like to do or see while we were their guests. None of us had any ideas, but I jokingly responded that
I wanted to see an elephant walking down the road like it owned the place.
And then, purely by chance, THAT. ACTUALLY. HAPPENED.

And I have a picture of an elephant’s giant ass next to a taxi to prove it.
And then we got back to work.
Here, we’re meeting with Matt Parker at a coffee shop to talk about next steps for
The Exodus Road and how we, as bloggers, can get on board and help the most. His love and passion for enslaved and trafficked men, women,  and children is palpable and his business plans are sensible. ⬅ That’s the kind of non-profit I want to back!
For our last night there, we wanted to celebrate with something really special…
So, um, yeah. We did.
This big sign greeted us as we walked through the door. I’m putting it here, but in a small form because it’s filled with stick figures defiling each other in a myriad of ways – all in the name of safe sex. Good on you, Cabbages and Condoms! 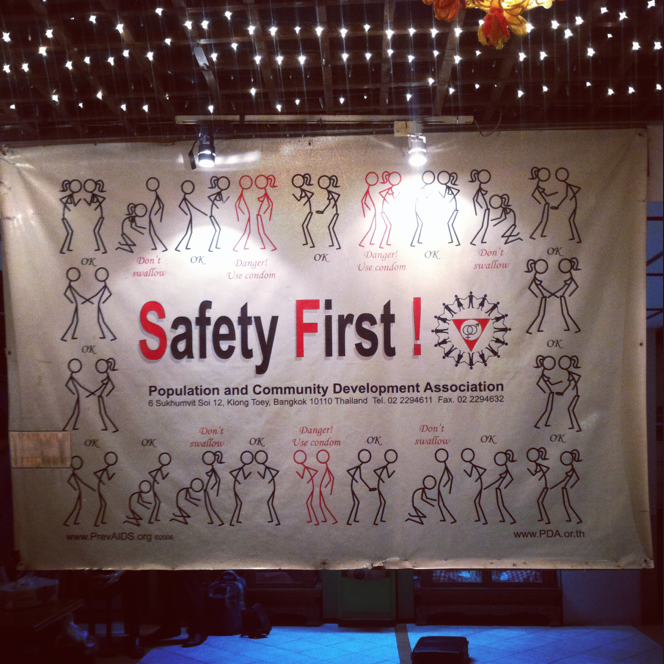 I guess I should not have been surprised in the least to find, once inside, a full sized version of Santa Claus… made from condoms. I knew no one would believe me, so I grabbed my camera. 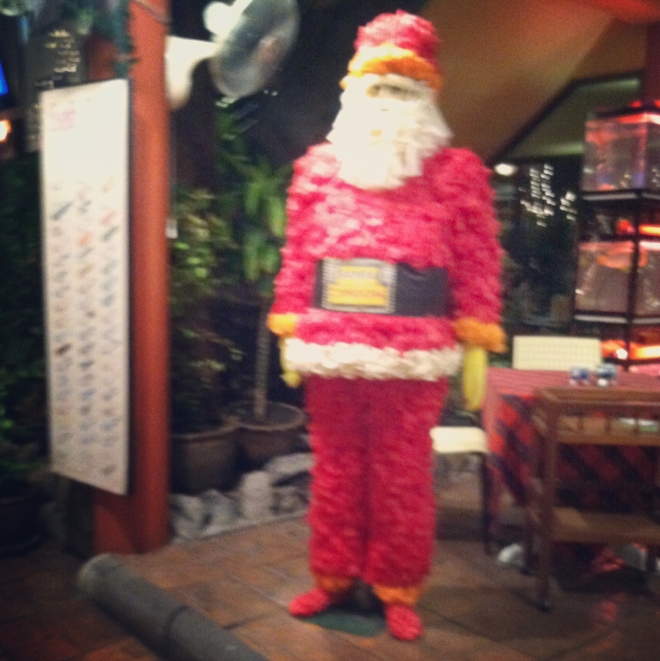 And, then, not trusting my own photographic prowess,
I got a CLOSEUP.
I’m sorry.
Then we got on a plane and flew home. The end.


Wow. This series paints such a good overview of our time there. It was a busy, blurry, up and down, high and low, bright and dark, streaky, wonky, beautiful week. And there were condoms.
I should probably pursue a career as a photojournalist.
But, at least for now, I’ll stick to what I know..
Like taking pictures of my cat being creepy.
………………………………………………………….

I’m so nervous and excited to roll out my real posts about all we saw and my hopes for this community’s involvement with The Exodus Road, their partners, and the future of those who long for freedom. It will take me some time, because I’m slow, but you probably already figured that out.

Thank you for your patience and thank you for your encouragement. It has meant so much to me!
In the meantime, check out Roo, Kristen, and Heather as they offer the unique perspective of their experience from their own eyes and hearts, and in their own words:
Roo Ciambriello, semiproper.com :
Bright Lights and Brothels
You can Stop Human Trafficking
Heather Armstrong, dooce.com :
Meet the Exodus Road,
Some Initial Thoughts from a Travel-Addled Brain
Oh no, dooce found Jesus
Kristen Howerton, rageagainsttheminivan.com :
The Difference between Sex Trafficking and Sex Tourism
What I learned About Sex Trafficking from an evening with two prostitutes
………………………………………………………..
I hope you enjoyed my photo essay! By my math, it’s worth about 40 words. It’s hard, I know, but try not to be jealous of my mad skills with an iPhone camera.
As always, THANK YOU for following along!