A white cop, a black kid, and a crime.

August 15, 2014 / Jamie Wright / No Comments
My husband was a cop for 10 years.
I’m not making that up. Before we became missionaries, he worked for the Sac Country Sheriff’s department for a decade; patrolled in a bad part of town, wore a badge over his heart, carried a gun, upheld an oath to Protect and Serve. His brothers on the force were black and white and asian and latino.
I’m telling you this because I want you to know that I totally understand the desire to defendthe officer who shot Michael Brown. I want to defend him.
I want to raise my hand, poke out my chin, and pompously explain that even if that cop was in the wrong, there’s a meaningful difference between murder and manslaughter.
I want to tell you about the quiver of fear in a cop’s voice when he gets home from swing shift at 2am, hangs his duty belt over the closet door, climbs into bed with his wife and whispers, words coming out in a shudder, “I almost shot someone tonight… I thought I was going to have to shoot him…”
I want the public to understand that when an officer involved shooting occurs, it’s not celebrated back at the office. The department weeps. They cry for the dead and they hurt for their partner… because, contrary to popular belief, most cops aren’t anxious for a chance to fire their weapons. Most cops became cops to save lives, not take them.
I want to demand the details of the case before we call for the head of a cop who showed up to fight a crime and shot a man in the line of duty.
Oh. How I wish it were all that simple.
But it’s not.It’s not simple. It’s not cut and dry.
It wouldn’t be fair or right or good to try to explain or excuse the death of an 18 year old, the anger of a community, or the agony of his mother. Surely, they deserve better than that… And, certainly, this story is bigger than that. This is so much bigger than a white cop, a black kid, and petty crime that ended in death.
I’ve watched this story unfold many times over now. I’ve followed stories like Michael Brown’s before, too many stories of unarmed black men shot dead, and the ensuing cry from the black community for justice. Every detail goes on trial in the court of Internet Opinion, which leads to no shortage of hateful, blind, ignorance spouted off in comments on news feeds and blog posts and editorials. It makes my stomach feel hollow and my heart feel shrunken. It makes my brain ache. But my pits get super sweaty when I see people who are anxious to defend the police (like me? Lord, help me.) try to blow off empirical evidence and hard statistics which show black men are at much greater risk of being shot by police, by using… well… empirical evidence and hard statistics to explain it away.
“They are at greater risk of being shot because they’re statistically more likely to be carrying a gun. Duh.”, they shrug.
You’d get a similar response if you were to point out that black men are more likely to end up in prison;“That’s because it’s been proven that black men commit more crime than white men.”
Or unemployed;“Black people have a higher rate of dependance on welfare.”.
Or dead at the hands of a member of their own community; “Gang violence is factually higher among blacks.”
And the terrible truth is, they’re kind of right.
In the U.S, our black neighbors arestatistically more likely to end up economically challenged, planted in jail, or shot dead.
So at what point should we bother to stop and ask why?

Why are our black children more likely to end up dead in the street than our white children?
WHY???
I’m gonna go out on a limb here, take a stab in the dark, venture a wild guess…. but I think itcould be because RACISM IS A REAL THINGand IT STILL EXISTS in our cities, schools, and communities.
If you’re not sure, pick any big city in America and ask the first person you find on the street where you can find a “white high school” and a “black high school”. I guarantee you won’t need to explain the question, and you’ll promptly be pointed in two different directions. You know why? Because segregation is still alive and well all over America. Our suburbs are homogenously white. Our city centers are homogenously brown. Don’t tell me that racism doesn’t exist today!

You can’t have it both ways. You can’t lean on statistics that claim black men are more likely to be under-educated, under-paid, or engaged in criminal activity (in order to prove they probably deserved to be shot), and, then, not conclude that our black baby boys are being born into some kind of serious systemic disadvantage.
Black children are born at higher risk of poverty and prison, because they are born black. That, my friends, is racism. That is a crime against humanity.
To be honest, while I believe there’s no doubt the Ferguson Police department handled the aftermath of this travesty poorly, I’m not ready to condemn the individual cop who shot Micheal Brown. I can’t. A cop’s spouse knows too much about what happens behind the scenes when a 911 call is dispatched or a criminal suspect is encountered, and a man or woman in uniform races into action for the greater good of the people. Indeed, I actually hope a thorough investigation ends with the justification of the discharge of the cop’s weapon in the course of his duty to protect and serve. If not, then we must sadly acknowledge the crime of manslaughter has been committed by a police officer and he must be held liable for his actions. I’m going to let the pieces of that puzzle fall into place without tossing my biased opinion into the ring.
But another crime has happened here, one that cannot be left unspoken.
For, no matter the exact details of this particular shooting outside of a convenience store in Ferguson, Missouri, Micheal Brown’s death can never be justified. Thisis why our brothers and sisters are decrying the demise of yet another black man at the hands of the police. Thisis why people across the nation are gathering to mourn and pray and protest over another life lost.
Micheal Brown was born black.
He was born black in a country that’s trying really hard to pretend that racism is in the past. He was born black in a nation that has, thus far, failed to bring true equality to her people. He was born black in a place where being born black is, in a lot of ways, still akin to being born less than white.
Where is the justice in that?!
How can we justify the death of a young man whose whole life unfolded under a pretty undeniable shadow of racial bias? Is it justto debate Michael Brown’s death without also discussing his disadvantage? 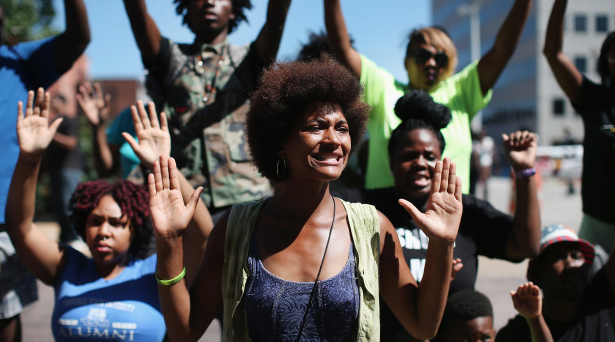 As people of privilege (*ahem* you know who you are), we have a responsibility to ask WHY, and then listen intently to the answer. Our neighbors in Ferguson have been standing in the street with their hands in the air, because they’re trying to tell us something about the balance of power and racial inequity in the U.S! Are we willing to hear them?
Because maybe it’s time to shut up and listen.
Or maybe it’s time to get up and act; to meet our friends in the street, clasp their hands, share in their tears, echo their outrage, and stand by their side until, statistically, a long and healthy future is equally as likely for every child.
Or maybe you’re a white, upper-middle class, Christian and you’re still not sure where you stand on this whole issue. If that’s the case, please let me leave you with this…
Jesus (who was decidedly not white or American, but, it could be argued, held a great deal of power and authority) drew a solid line – like, he literally drew a line – and then He stood on the side of the weak, the burdened, the vulnerable, and the oppressed.
Jesus rose to his feet in the presence of injustice.
Over and over again, we see Jesus stand on the side of the disadvantaged.
…And, I don’t know about you, but I think I want to stand with Jesus.
…..          …..         …..
Where do you stand?