August 2, 2014 / Jamie Wright / No Comments
The other day I posted this pic on instagram of my angelic baby girl… um, I mean… my brother’s baby girl taking a nap on my shoulder at Starbucks… 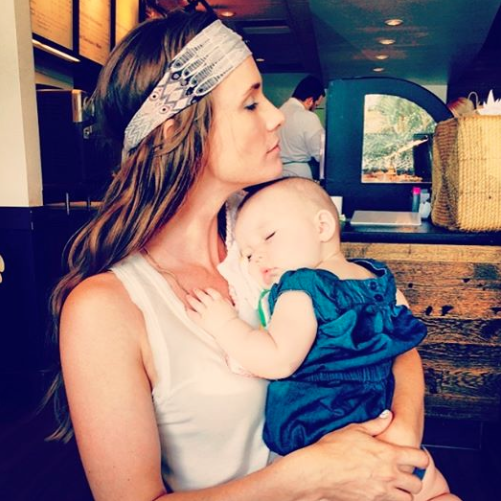 …and then the whole internet was like,
“WHERE DID YOU GET THAT HEADBAND?! TELL US RIGHT NOW!!!”
But then I never said where it was from – and I’m sure people thought I was trying to keep it a secret, because sometimes when a girl finds something really cool, she has good reasons for keeping it to herself. I know you know what I’m talking about, since apparently we ALL own the exact same southwest print maxi skirt from Target and it’s really awkward when two (or three!) of us walk past each other wearing it on the street, or at church… or in Target. (Which has happened to me.)

I swear, I wasn’t being secretive in order to preserve and protect my spot as the only person on the planet with this kick ass headband.

In fact, this little headband is my new favorite way to pretend I don’t have greasy summer bangs (Ha! Bite me, bobby-pins!) and the company that sells them is pretty amazing, too, so I’m actually super excited to share this find with you.

The headband is from a little New York based company called rePURPOSE that creates and sells accessories — with God’s planet and His people in mind — by repurposing old thrift store junk into new, hip stuff. So, yes, I’m probably wearing the armpit of Uncle Joe’s cast off triple X tee on my head, but I really don’t care because CUTE, and also because of this (which I stole this from their about page):

rePURPOSE was started with one idea in mind – to raise money for those in need. It is based off of three major principles: to donate profits both locally and internationally, raise awareness, and to make a conscience effort to use materials that don’t support slave labor. Every single aspect of this company is designed to make a difference.
Materials used for rePURPOSE products are donated, purchased from thrift stores or made in the USA. This also means that every single product is one-of-a-kind!

I hung out with the people behind rePURPOSE last weekend and, I’m telling you, they are legit. It’s a great concept and a great business model and they’re using the profits to do great things in the world and their community. Plus, part of their profits go directly to my favorite non-profit, so there’s that.

I don’t write commercials, you guys. rePURPOSE is not paying me to love on them in public. Over the last year, I’ve been actively seeking ways to make socially conscious purchases, ways to consume less, give more, and make all the ways I spend my money count toward the betterment of our world. I’m sharing (my kick ass headband and) rePURPOSE with you because if you’re not already headed down this road, I think it’s a good place to start.