We were talking about the Church and the world, and where we see God moving in them, and when the conversation turned to art and writing and music, he got very excited. He stretched his arms out wide and kind of bounced up and down a couple of times, the way someone does at a concert when the bass drops or something. He stood there for a second, swaying to the tune of some unheard song, then he clapped his hands together and that’s when he said it, the thing about having fire in his bones. 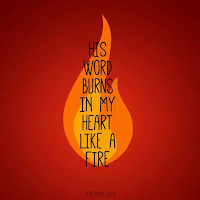 I wanted to stay, but I had to get out of there. I felt weird. I felt sort of… envious. I was thinking, “I want that. I want fire bones.”

And then I thought, “If you write about this, don’t say ‘fire bones’ because it sounds like some kind of venereal disease.”

And then I was like, “Of course, if it was an STD, it would be a whole lot easier to get. …But then for sure you couldn’t write about it.”

Because that’s how my brain works. So anyway.

I sat in the car for a few minutes wondering about the disparity between my friend and me. Here he was, lit up for the things of God — and I stood right next to him, holding a barely burning ember in the sweaty palm of my hand, hoping that no one else could see the difference between us.

A few nights later, we sat outside with some new friends, drinking craft beer and White Russians and talking Jesus. We huddled around a fire pit, keeping the cold night to our backs as we laughed, telling stories and exploring the strengths and failings of our beloved Church together. It was a good night. And one of the things I took away from it (aside from a mild but lingering hangover and that achy feeling you get in your cheeks from smiling too much) was that a fire doesn’t keep burning unless it’s fueled and stoked. You can’t just light a fire and expect it to stay lit indefinitely.

While were hanging out, the fire we sat around inevitably shrank. But only until our host would grab a log, use it to stir up the glowing char and then toss it in on top, and the fire would come back to life. Sometimes it would start to wane and someone would lean in close and simply blow on the red-rimmed embers, and they would bloom into flames. It didn’t take much really, but the fire wouldn’t have lasted if it hadn’t been tended to.

And then I clearly saw the difference between my friend with the fire bones and me.

Even though I know… I mean, like, I really know….

…His Word brings me to life.

…His presence is a burning light to my spirit.

…His breath ignites my soul.

My bones are glowing embers, longing to burst into flames once again.

I think it’s time to stoke the fire.