February 19, 2015 / Jamie Wright / No Comments
The story got everyone talking and the sex scenes got everyone tingling, and then, to the horror of English lit majors and book publishers everywhere, E.L. James lusty novel, 50 Shades of Grey, spread across the nation like a literary strain of herpes.
I read the whole book. I sat through the whole movie. I survived the 50 Shades of Grey phenomenon and lived to tell about it… So that’s what I’m doing.
I don’t even want to talk about how truly, exceptionally, remarkably bad the writing is, so I’ll only say this; The writing is the worst! At this point, it’s pretty much universally accepted that 50 Shades of Grey does not owe its popularity to prose. If you need an example of why, google it. Or you can just trust me when I say that, as far as books go, this is a really shitty one.
For those who are completely unfamiliar with 50 Shades of Grey, perhaps because you’re lucky enough to have been in a coma or lost in the woods for the past year or so, the story goes like this:
>>>>>>>>>>>>>>>>>>>>>>>>>>>>><<<<<<<<<<<<<<<<<<<<<<<<<<<<<<
Anastasia Steele is a socially awkward, clumsy, nerd-virgin who has no idea how super-duper hot she is under her frumpy cardigan sweater and messy ponytail. But when Christian Grey (the youngest, hottest billionaire in all the land) meets her, he instantly sees her naughty sex-kitten potential, and then she bites her lip and it’s all over – he’s smitten. He must have her! And by “have” I mean “own”. So he buys her.Sort of. 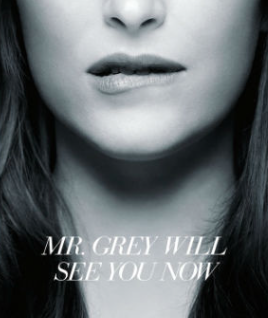