When we are all Priests and Levites.

November 18, 2015 / Jamie Wright / 1 Comment
On Friday, the world fell to its knees in sorrow as the media brought us the horrible aftermath of a coordinated, multi-site, terrorist attack on Paris. The outpouring of love and support was swift as status updates declared our collective heartbreak, Instagram became a sea of candle lit prayer and Eiffel tower peace signs, and the French flag graced profile pics far and wide.
The loss of life was terrible, indeed, but it seemed terror itself would not prevail. In the hours following those bloody events, I started to believe the world could not be terrorized by a handful of men with guns. Global citizens stood together in a strong and united front to give wannabe terrorists the finger; We will weep with those who weep and mourn with those who mourn, you assholes. But we will not be terrified. Not by you.
But then we learned some of those men with guns entered the city hidden in a stream of Syrian refugees, like parasites riding on the backs of the innocent, and the attack on Paris that appeared to be over swelled to unleash a second, far more powerful wave of terror upon the world.
Governments across the globe have been forced to reevaluate how to handle the mass of Syrian refugees seeking safety and asylum from the very men who may be hiding amongst them. Opening borders to millions of families forced to flee their homes under conditions of indescribable violence and prolonged starvation has become much more than a huge social and economic burden for the countries and communities willing to offer sanctuary to the displaced. Bundled babies and their exhausted Mamas have been contaminated by their mere proximity to danger, while young men and their desperate fathers have more potential to be active carriers of Hate.
The question is, do we let them in?

The concern is legitimate. It’s real. This happened. And whether you like it or not, every governing body has an obligation, first and foremost, to its own citizens, their economy, and their security. The risk must be assessed. Parameters must be set. Systems must be enforced.
But refugees must not be ignored. Not by the Government, and most assuredly not by the Church.
Far from the compassion and mercy we displayed on Friday, on Monday an embarrassing number of American Christians took to social media to yank the Welcome mat out from under the battered men, women, and children at our doorstep. Fear for our property, our lives, our kids, our faith; fear, fear, fear decrees we MUST NOT take in any of those people. Because what if. What if. There are so many “what ifs” to be considered, but they all boil down to the same thing:
What if I try to help them and something bad happens to me?
And, honestly? That fear? It resonates in my heart. I am afraid.
I wantto Love others. I wantto serve and give and help. I want to meet felt needs. That’s truly the kind of human I want to be, and I believe it’s the kind of Christian I am called to be. But, before I help you, I am forever counting the cost to me. I really do wantto help the orphan, the widow, the refugee… but I don’t really want it to cost me very much. Actually, I don’t want it to cost me anything. So in the face of a humanitarian crisis, I’m tempted to say bullshitty things like, “We don’t have to take them in to help them.” And “We can still love them from a distance.” And “We can’t be expected to help everyone.” And, I don’t know, some other bullshit about a dog bowl full of poisoned grapes, or something.
But Jesus, you guys. I swear. Jesus effs up all my best plans.
In times of confusion, I turn to bourbon the Bible for guidance, but when I cracked that sucker on Monday to cherry pick it for verses supporting my fears, Jesus totally got in my way. He is alwaysdoing this to me. I was trying to find that story where Jacob (or somebody. I can’t remember) plays nice with another clan (or whatever it’s called) until they’re all super chummy, and then he’s like “Hey, I have an idea! You guys should totally let us chop off your foreskins. All the cool kids are doing it.” So they do. And then, while their new ‘friends’ can’t fight back because their wieners are sore, Jacob (and his sons?) kill them all. And the point is, you just can’t be too careful when it comes to your life. Or your wiener.
Anyway.
Instead, I landed here… 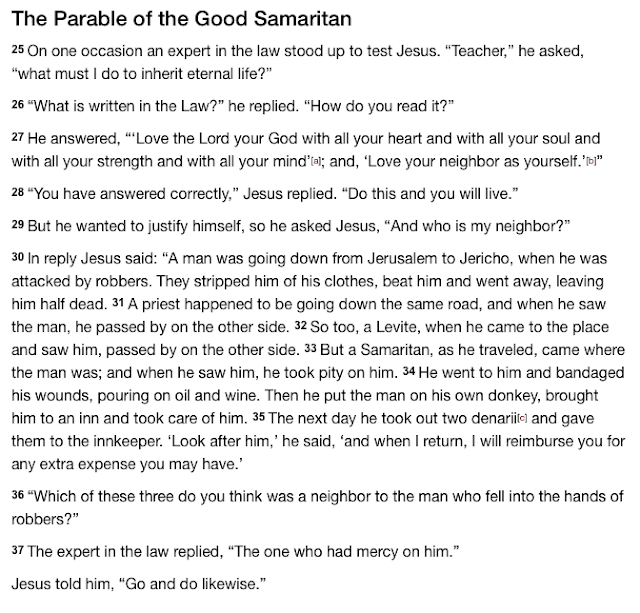 Terror turns us into priests and Levites.
Fear will always lead us to the other side of the road, away from the one in need, because fear convinces us that to stop and help is too costly and too dirty and too dangerous.
So do we let them in, Church?
It’s true, if we open our borders, doors, homes, and hearts to Syrian refugees (or homeless vets, or foster kids, or recovering addicts, or poor people of any kind), there is a chance that we will unwittingly show love to our enemies. We may even end up getting hurt. But if we choose to avoid our neighbors and ignore their dire circumstances, then maybe it doesn’t really matter if a handful of terrorists sneak in to the Land of the Free and the Home of the Brave behind a family of hungry refugees; When the Church is willing to let innocent people with genuine needs die in the street because we’re too scared to get involved, terror has already done its job – it has stolen our identity in Christ.
When Christians are too terrified to Love their neighbors, when we are all priests and Levites, the terrorists have already won.
Are we really going to let that happen?